After knocking off No. 1 again, Arizona eyes another Cinderella story at NCAAs


SCOTTSDALE, Ariz. – Arizona sophomore Gile Bite Starkute had just hit a beautiful approach onto the back fringe at Grayhawk’s par-4 10th hole, about 25 feet from the hole, in her extra-hole battle Tuesday with Stanford’s Angelina Ye when Wildcats head coach Laura Ianello turned to her team’s trainer and said, “Let’s Bianca this.”

The unique verb has become legend around Tucson after Bianca Pagdanganan’s clutch eagle putt that got the Wildcats into a playoff for match play three years ago at Karsten Creek and sparked an eventual NCAA title-winning run.

Starkute remembers watching Pagdanganan’s heroics from 2018, though the then Arizona verbal commitment had to settle for highlights. The live telecast was on in the middle of the night back home in Vilnius, Lithuania, a town that has more disc golf courses than regular golf courses.

On Tuesday, Starkute was the highlight.

She rolled in the birdie bomb, her ball hitting the dead center of the flagstick before dropping and sending Arizona on to Tuesday afternoon’s semifinals of the NCAA Women’s Championship. The eighth-seeded Wildcats knocked off top-seeded Stanford, which won the stroke-play portion by 13 shots and boasted the individual medalist in Rachel Heck. Heck won her match in the anchor spot, but Arizona took three of the other four in a 3-2 victory.

The Cardinal, who still have never missed match play since they won in the inaugural season of the format in 2015, continued the undefeated trend of No. 1 seeds failing to win it all.

“It felt amazing. It felt absolutely amazing,” said Starkute, who had just saved bogey to extend the match on No. 18 after hitting her second shot into a bush and taking an unplayable. “I knew that I had to make it. I knew that it was to move on to the next round. Before I putted, my coach (assistant Justin Bubser) told me, ‘Just make it,’ and it fell in.

Ianello can attest. She’s had her fair share of déjà vu moments this week. Three years ago, the Wildcats were also the eighth seed and defeated No. 1 UCLA, 3-2, before beating Stanford and Alabama.

“We were that Cinderella story that year,” Ianello said. “We can do it again.”

The Wildcats will now face Ole Miss, which needed a 22-hole win by Andrea Lignell and 21-hole victory by Samilla Sonderby to edge Texas, 3-2. Sonderby, a freshman from Denmark who arrived in the spring and is playing just her third college event, topped freshman Ashleigh Park with bogey on the 10th hole. 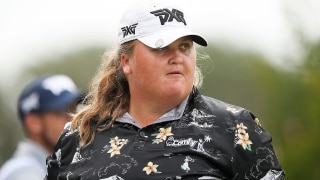 Three years removed from her national championship moment, Haley Moore is still navigating her way as a professional.

In the other semifinal, reigning NCAA champion Duke will meet Oklahoma State. While the Blue Devils, who won two years ago at The Blessings, are the seasoned veterans, the Cowgirls are making their debuts in match play. (Ole Miss is also a match-play first-timer.)

Oklahoma State head coach Greg Robertson, who does have two prior quarterfinal trips (both losses) with Kent State, has tried to keep things loose during a pressure-packed week. He’s continued the tradition of writing jokes on his team’s pin sheets. Tuesday’s material included this literal gem: You know what actually makes me smile? My facial muscles.

The Cowgirls were certainly all smiles after a 4-1 win over Auburn. So, too, was Duke following its 3-1-1 triumph over host Arizona State.

Senior Gina Kim was the only Duke player to lay up on the short par-4 17th hole in her match against Sun Devils leadoff specialist Olivia Mehaffey. She then wedged to 5 feet, sank the putt, delivered a huge fist pump and roar, and watched as Mehaffey missed from 3 feet to lose the match. After that, she turned into cheerleader as Duke advanced with wins from two freshmen, Anne Chen and Phoebe Brinker.

“Having the experience of winning a national championship really plays a huge role in this,” Kim said. “From two years ago, I learned that energy is a big part in match play, and it can make or break a match.”

All four teams heading into the second half of a marathon Tuesday are feeling energized.