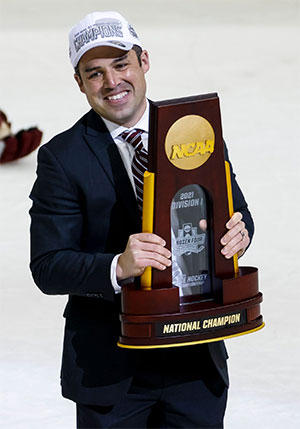 Ben Barr, who recently helped lead Massachusetts to a national championship, has been named Maine’s permanent head coach, and signed a four-year contract.

Assistant, and alumnus, Ben Guite, had been filling the role of interim head coach since the sudden passing of Red Gendron. Guite was considered a top candidate for the permanent position.

But the selection committee, which included athletic director Ken Ralph, and prominent alumni like Jim Montgomery and Garth Snow, decided to by-pass Guite and other alums currently coaching in the hockey word, for the 39-year old Barr.

“We are thrilled to welcome Ben Barr to the University of Maine,” Ralph said. “He brings with him an amazing track record of success in collegiate hockey. In a very competitive field of candidates, Ben stood alone with his comprehensive plan for building and sustaining success for UMaine hockey. It was also clear from the research we conducted with people throughout the hockey world that we have hired the exact right person for the job.”

Ben Barr, who was a forward at RPI, has spent 15 years as a Division I assistant coach, and helped three teams to national championships.

“I’m really excited about the future of Maine Hockey with Ben Barr as our Head Coach,” Montgomery said. “He has shown the ability to recruit National Championship teams in Hockey East while working with a vast number of great coaches.”

In addition to UMass, he was on the staff of Providence until 2014, leaving one year before its national title. And he was an assistant at Union for years as it built a program that eventually won the 2014 title.

“Being named the fifth head coach of the Maine Black Bears is an incredible honor and very humbling,” Barr said. “There is a tremendous sense of responsibility and pride from all of the student-athletes and coaches that have passed through this program, and we will bring that passion with us as we build a program which reflects the values of the State and University of Maine. The past year has taught us that we can not take anything for granted. Black Bear Hockey is an essential part of the University and the community, and I know the people of Maine are eager to see their Black Bears compete for Hockey East and NCAA Championships again.”

Barr began his coaching career at his alma mater, RPI, where he was a volunteer assistant from 2004-08.  Barr joined Union in 2088 and spent three seasons there until heading to Providence, where he stayed until 2015. Barr then went to Western Michigan, before going to UMass when Carvel was hired.

The Faribault, Minn., native helped UMass recruit a team that transformed from 5-29-2 in the first season of the Carvel era, to back-to-back Frozen Fours and a national championship.

“In our interview, Ben really connected with us. His presentation was excellent,” said 1989 Maine hockey alum Bruce Major, also a member of the search committee. “I believe a key reason he has had such remarkable success recruiting is that he has an amazing ability to convey sincerity. You talk to him and you trust him. He has been able to convince players, parents, and advisors that they should put their athletic future in his program’s hands, and he has done it everywhere he has gone. I believe he will do the same thing for the University of Maine.”

Said Carvel, “Ben Barr has made an indelible mark on the UMass Hockey program and will forever be a National Champion. Ben has been highly instrumental in helping put together multiple championship teams at the Division One level and I am excited to see him get the opportunity to serve as a head coach. Ben has found success due to his work ethic and knowledge of the game but what sets him apart, in my eyes, is that he is a high quality individual and I will miss working with him on a daily basis. We wish him luck and thank him for everything he has given to UMass Hockey over the past five years.”