AUGUSTA, Ga. – Emilia Migliaccio first knew something was off at the North & South Women’s Amateur last summer. She birdied her final three holes to shoot even and felt nothing.

“I didn’t feel that feeling of triumph,” said Migliaccio, “and I was like, that’s weird.”

Migliaccio, a 21-year-old senior at Wake Forest, has long been a favorite in women’s amateur golf. She won the ACC individual title in 2019 and won the gold medal at the Pan-American Games a few months later. She made the quarterfinals at the North & South Women’s Amateur and U.S. Women’s Amateur over the summer

For a few months now, however, Migliaccio has known she won’t pursue golf at the professional level. Instead, she’ll pursue a passion for writing she has had since she was a kid. Migliaccio, who published a novel in 2018, will spend the summer on Golf Channel’s editorial staff before heading back to graduate school at Wake Forest. She’ll complete a two-year program for her master’s in communication, which will include part-time work as a teacher’s assistant.

Migliaccio, a smiley presence in from of a microphone, thinks she could offer college students some advice in that area.

“One of the classes that a lot of TA’s teach is public speaking,” she said. “I feel like I could help a lot of people with that, because everyone is really scared of it and there’s no need to be scared.”

In the past eight months, Migliaccio played the U.S. Women’s Open and ANA Inspiration, LPGA majors, as well as the Carolina Golf Classic on the Symetra Tour, where she finished fourth.

After the start of 2021, Migliaccio finished 33rd at the Sally Amateur, a tournament she’d won in 2018, and fired uncharacteristic rounds in the high 70s in her first college start, the UCF Challenge. 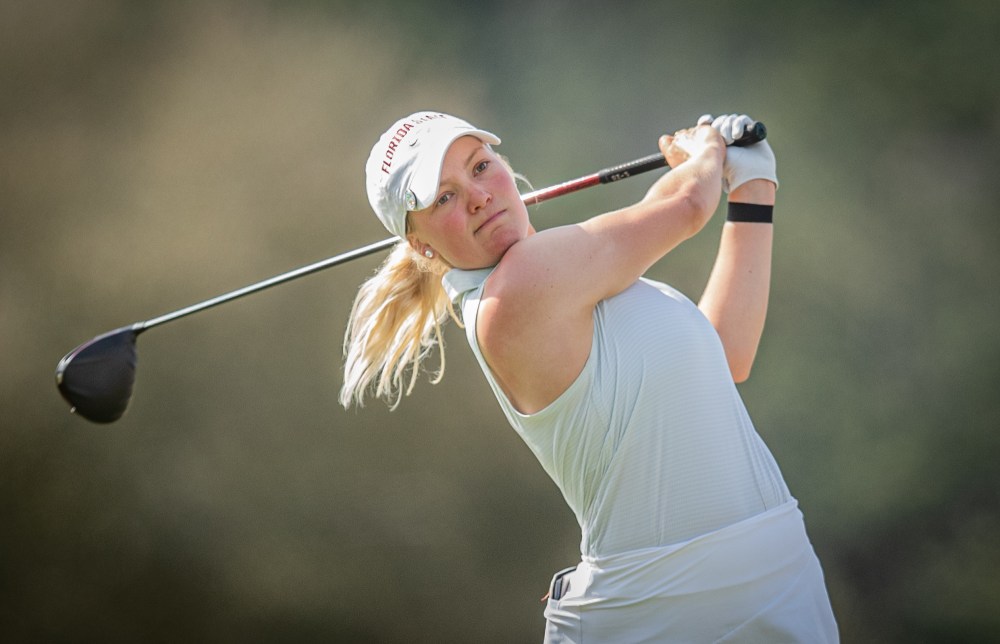 “I don’t know what’s going to happen down the road, but right now I need to make this decision for me.”

When Migliaccio would play a bad round, it felt like her world was ending. Now she’s looking forward to a new chapter and new opportunities. It’s a hard pivot after working so long toward professional golf. She played her first tournament as a 9-year-old, amid a period of wanting to play professional soccer. Until she was 12, she wanted to play the World Cup and be the next Hope Solo.

As a golfer, Migliaccio always wanted to be World No. 1 – and got close, landing at a career-best No. 3 in the World Amateur Golf Rankings for a while – but that’s been her approach to everything.

A freer Migliaccio could make plenty of headlines with her game at the Augusta National Women’s Amateur and also as the college-golf postseason progresses. In 2019, when Wake Forest was the NCAA runner-up, Migliaccio won all three of her matches at the national championship to help carry the Demon Deacons.

For the ANWA, she’ll have mom Ulrika on her bag, as usual. Ulrika, a former member of the Swedish national team and the University of Arizona women’s golf team, often walks every step of the way with her daughter. Should Migliaccio make the cut to play at Augusta National in the final round on Saturday, the plan won’t change. Familiarity is still an advantage.

And as for what Migliaccio’s golf future holds? Still expect to see her play amateur golf, just less of it – particularly as she completes her master’s degree. Mother and daughter might even switch roles, Migliaccio joked, so that she can pick up the bag and return the favor for mom.

“I’m not thinking too far ahead,” Migliaccio said.

That’s the beauty of having options.

Maria Fassi captivated at Augusta in 2019. Now it could be Brooke Matthews’ turn.