From Street Smart to School Smart


Armed with three grocery bags, David Sortino, Ed.M.’81, showed up at a residential school for at-risk teen girls in San Francisco, ready to teach math. Sortino was interviewing to become the principal of the school, and the math lesson was part of the interview process.

As he writes about the experience in his new book, From Street Smart to School Smart, the girls at first had no idea what he was doing — they were working toward getting their GEDs and pizza ingredients and red and white checkered tablecloths didn’t factor into their plans.

But Sortino, who had trained as a psychologist and later at Harvard under Professor Lawrence Kohlberg, knew he first and foremost had to teach the girls something more important than fractions or calculating percentages: He had to teach them to trust. 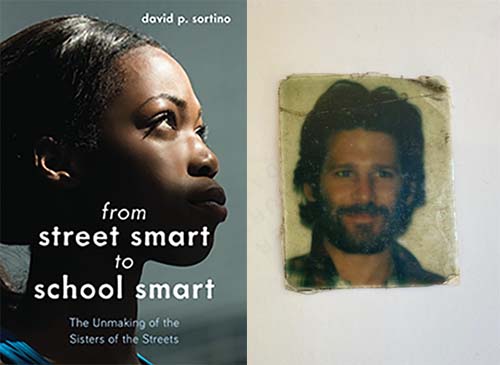 “I wasn’t going to just teach a math class,” he says. “They needed to bond with me. I wanted them to know who I was.” It was especially important because these teens were in fight or flight mode after years working as prostitutes, drug dealers, and gang members, and living in foster homes and juvie hall. “I knew they needed to find that trust, or they wouldn’t learn as effectively,” Sortino says. He also needed to show them that he wasn’t just another “man on the floor” — a warning term the girls called out to one another when a man came into their space. “I had to become the new ‘man on the floor,’ a man that wished for their well-being and success in life as valued human beings,” he writes.

The pizza lesson worked — Sortino gained the girls’ trust and got the job. Over the next three years he, he found other ways to personalize the curriculum and link school smarts to street smarts, which the girls had plenty of. He also helped the students create their own “just community” — a concept he learned from Kohlberg — when they were given a voice in creating school policies. And it started early on, just after the pizza lesson, when he showed them how to literally craft their own classrooms after taking them on field trips to pick up old school desks and buy material for building bookcases and bulletin boards. The silver lining of these activities, he writes, is that, in time, the girls “chose not to be tempted to return to the always-lurking ex-pimps, drug dealers, and gang bangers who yet tried to lure the girls back into their realms…. They were choosing new values.”

All of these experiences became the basis for Sortino’s new book, which tells his story as the principal, but mostly focuses on the girls living at the school, the “street sisters,” as they called themselves, especially 17-year-old Jewels Odom, who, by the end of the book, becomes the class graduation speaker.

“I didn’t want to just be the white man coming in who saved the kids,” Sortino says of the book’s focus. “It was Jewels who was the driving force.”

One of the most notable parts of the book — one of the reasons he is now meeting with an agent and has movie producers talking to him about scripts — is the dialogue, which is detailed and full. Sortino says he kept extensive notes while he worked at the school, and started writing about his experience just after he left, when it was fresh on him mind. But he is also just good at remembering.

“I have an ear for voice and storyline,” he says.

And there’s another important factor: the intensity of the experience. Years working long hours alongside the girls have become so encoded in his memory because they were so emotional. “The dialogue and the emotion were so intense,” he says. “If you go into a situation like this, you remember things.”

Previous articleSave over $1,000 on a ThinkPad X1 Carbon
Next articleKamala Harris Net Worth 2021

Ever wonder how to own a sports team? It’s a dream shared by children and adults like, but a small number of people...
Adulting

When Katrina Lake, founder of Stitch Fix, announced she was stepping down as CEO of her company last month, many were stunned. Investors, surely—shares...

Ever wonder how to own a sports team? It’s a dream shared by children and adults like, but a small number of people...
View Post
Adulting

When Katrina Lake, founder of Stitch Fix, announced she was stepping down as CEO of her company last month, many were stunned. Investors, surely—shares...
View Post
Wellness

It doesn’t matter whether you’re having a boy or a girl. Either way, nature-inspired baby names are a fun idea! Plant baby names...
View Post
Fitness