During World War II, Jack Burke Jr. served in the Marine Corps, where the pro golfer and martial arts instructor turned combat trainer used the skills of balance and timing to deal with hand grenades. In the Mojave Desert, he built a jump stadium so that U.S. pilots could prepare for jumping off an aircraft carrier after a kamikaze attack.

“(The Japanese) would run their airplanes right into our boat,” said Burke. “The only way off an aircraft carrier is to jump, and that’s about 70 feet or more.”

To help those who were skittish, Burke jumped too.

It shouldn’t come as a surprise that a member of the Greatest Generation still shows up to work each morning at age 97.

“Every day is opening day” is Burke’s mantra at Champions Golf Club, which he co-founded with his former babysitter, three-time Masters champion Jimmy Demaret, in 1957.

It has been years since Burke, the oldest living Masters champion, has made the trip to Augusta National. Burke turns 98 on Jan. 29 and shares a locker with Woods.

“I used to tell him to leave some of those crumpled up $100 bills in the locker,” said Burke. “Tiger’s pretty tight with that money.”

Burke’s wife, Robin, would love for him to attend another Champions Dinner, maybe even take part in the ceremonial tee shot alongside Jack Nicklaus and Gary Player.

“I work on him every year,” said Robin, who notes that her husband still likes to get on the range and a pop a few drives, especially when the weather gets cooler. Of course, he likes to putt too. 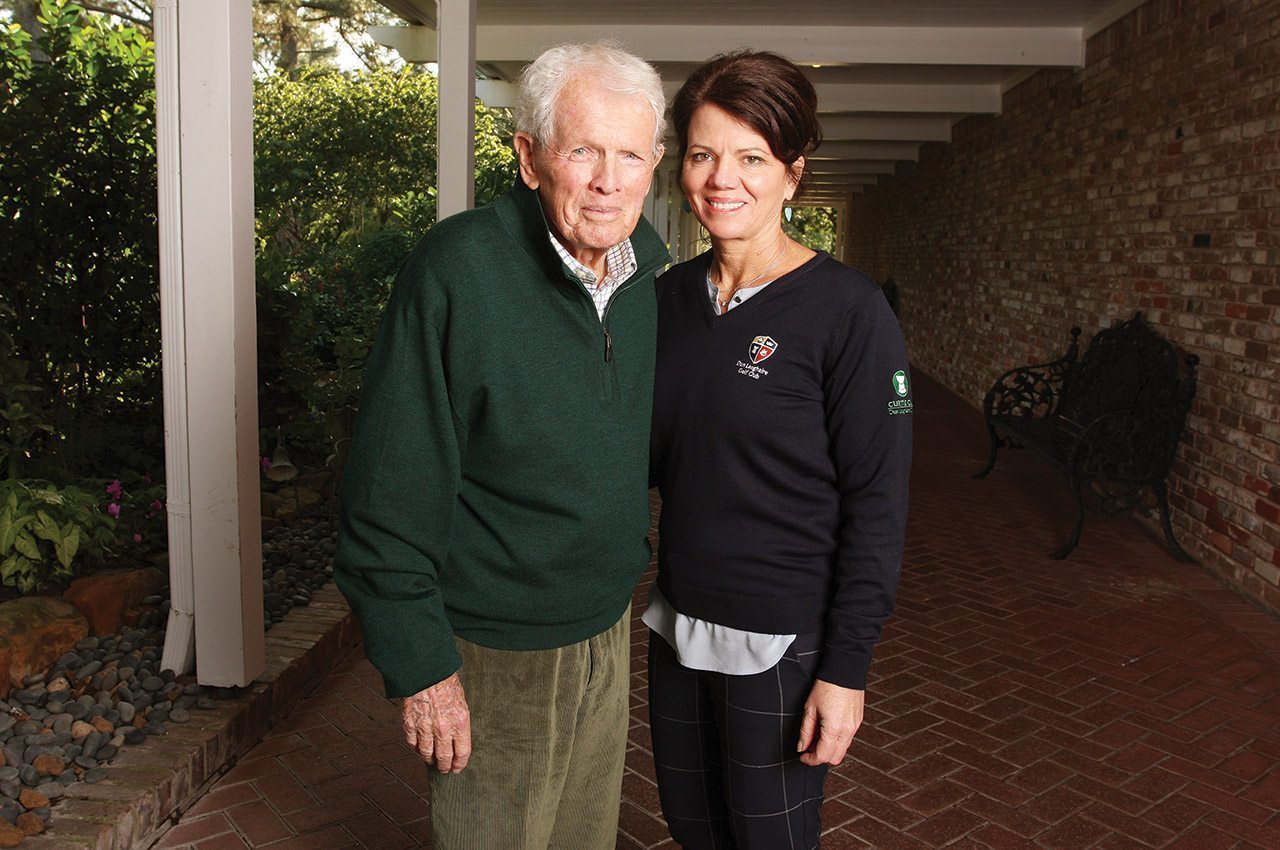 The LPGA’s mantra “act like a founder” pays tribute to the women of Burke’s era who built the LPGA 70 years ago. Burke spent a good deal of time around one legendary woman who carried the LPGA in those early years, Babe Zaharias.

In fact, Zaharias took lessons from Jack Burke Sr., at River Oaks Country Club in Houston, where Burke was the head pro.

“When taking a lesson from my dad,” said Jack, “he would make you throw clubs, just like you would throw a stone. I had to go pick them up – there was 26 of them. Babe used to throw those clubs like a man would; she was really strong.”

After the lesson, Zaharias would say to the 9-year-old boy, “Come on Jackie, I’m going to beat your little butt.” And off they’d go to play nine holes.

It was an early introduction to the women’s game that carried on deep into his personal life when Burke married Robin, who he’s quick to note is a nine-time city champion in Houston. She was also runner-up at the 1997 U.S. Women’s Amateur and a past Curtis Cup player (1998) and captain (2016).

Jack, a 16-time winner on the PGA Tour, captained Jack Nicklaus, Arnold Palmer, Lee Trevino and Billy Casper to victory at Muirfield in the 1973 Ryder Cup and told his wife to follow the familiar Frank Sinatra tune and lead by doing it her way ­– not that he’s ever short on opinion.

Robin first met Jack for a putting lesson while she was in college at the University of Texas. The ’56 Masters and PGA champ beat her in a putting contest that day by rolling the ball with his foot.

The lessons have continued throughout their marriage, with Jack convincing Robin to quit holding the club like a rattlesnake.

“I was tense for a lot of years,” she explained. 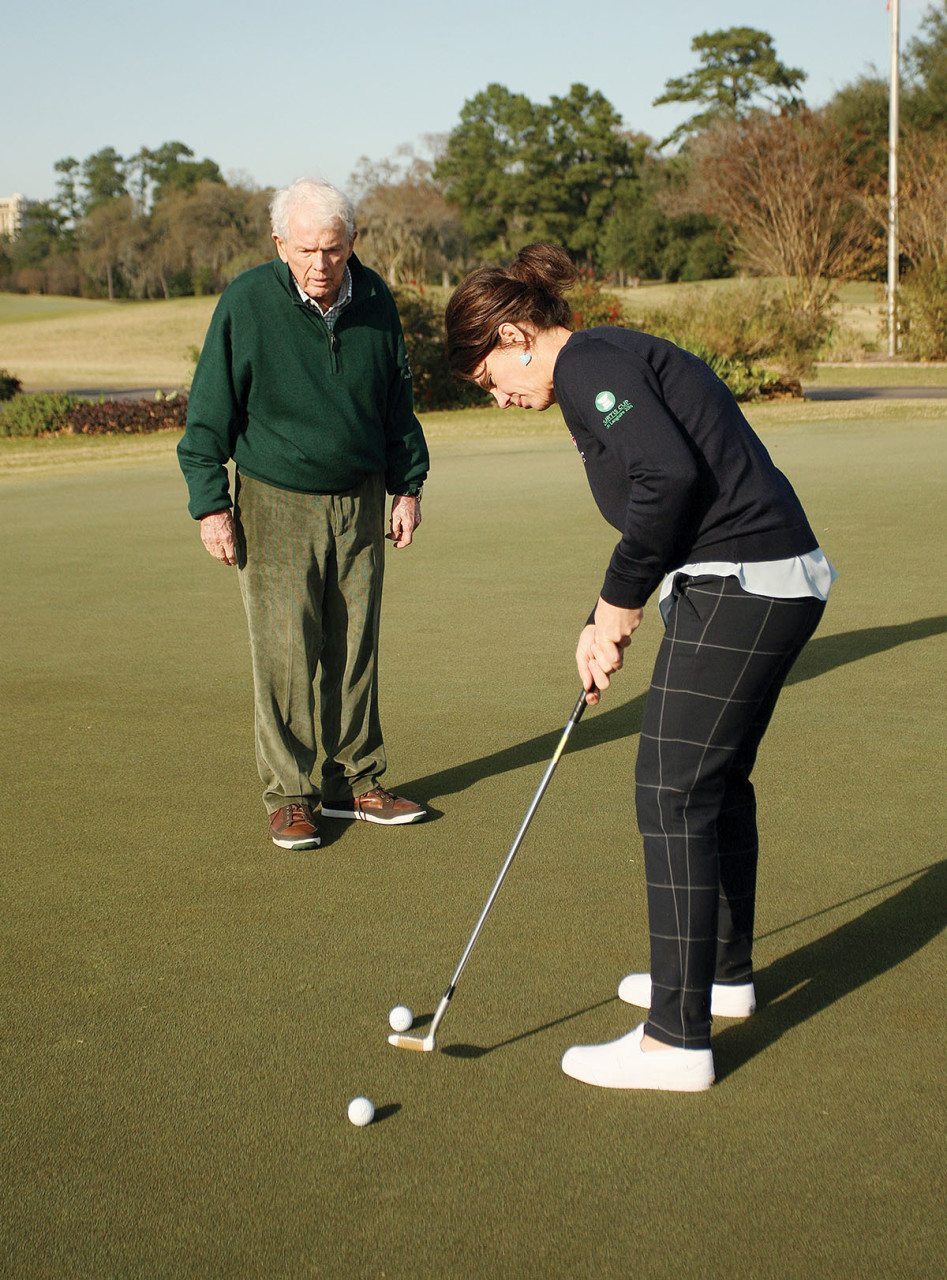 There are roughly 800 members at Champions, including social memberships. Many like to go into Jack’s wood-paneled office, which basically doubles as a museum, to look at pictures and listen to stories. Three Champions members have walked on the moon.

“We made a golf club for Alan Shepard,” Jack said proudly as he gave a virtual tour, “and he took it on the moon and hit a shot with it.”

Half the membership at Champions are single-digit handicaps. They encourage play of all levels, Robin said, but if you’re a member at Champions, it’s about getting better.

Prospective members are interviewed by Jack, even Stacy Lewis, who noted his emphasis on knowing the game’s rules.

“Everybody knows if you want to play with the best players (in Houston),” said Lewis, “that’s where you go.”

The 36-hole facility will offer a unique test to the 156 players who compete in next month’s Women’s Open. At Cypress, enormous greens are the course’s defense. Lag putting will be crucial. The Jackrabbit Course, by contrast, features smaller greens, tighter fairways and more doglegs.

Lewis said it wouldn’t be surprising for a player to hit 17 greens at Cypress and still shoot over par.

“A lot of tournaments I’ve played there where I thought it hit pretty close,” said PGA champ Hal Sutton, a Champions member, “and I get up there and I’m 15 to 20 feet.”

Cypress has undergone a facelift of sorts, with upgraded bunkering and more elevated greens. Robin believes it now plays even more difficult.

During U.S. Women’s Open week, Burke will be easy to find. Most likely he’ll be near the putting green and range. His passion for the game, Robin says, remains unlike anything she’s ever seen. Come to work and make every day exciting, Jack preaches. Don’t look tired or worn down.

“That’s how he runs his club,” said Robin.

The way a champion would.

SPOILER ALERT: Do not read ahead if you have not watched Season 4, Episode 9 of “The Masked Singer,” which aired Nov. 26...
Tv Shows

Diane Keaton has said watching the recut version of Godfather: Part III was “one of the best moments of my life.” The actress, who...

SPOILER ALERT: Do not read ahead if you have not watched Season 4, Episode 9 of “The Masked Singer,” which aired Nov. 26...
View Post
Tv Shows

Diane Keaton has said watching the recut version of Godfather: Part III was “one of the best moments of my life.” The actress, who...
View Post
Trending News

The whirlwind week of major Taylor Swift news continues. On Tuesday, Taylor announced the release of a surprise folklore movie special, and as...
View Post
Fashion

REGISTER TO VOTE HEREOne month after giving birth to her first child with Zayn Malik, Gigi Hadid has made her *official* return to...
View Post