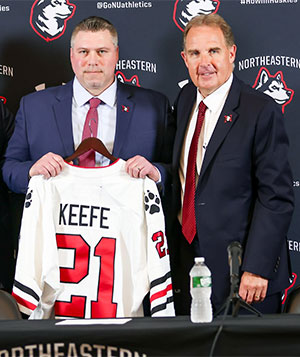 Jim Madigan first introduced himself to Northeastern University Hockey in 1981, his first of four seasons playing for the Huskies. Upon graduating, Madigan took his first coaching job with Northeastern, serving as an assistant coach from 1986 through 1993 under Fernie Flaman, Don McKenney and Ben Smith.

After serving as a scout for the New York Islanders and Pittsburgh Penguins for parts of 19 years at the National Hockey League level, Madigan returned to his alma mater in 2011, taking over for Greg Cronin as head coach.

It was a position Madigan held for 10 seasons until he was named Northeastern’s athletic director in June. With Madigan’s new role came the promotion of his longtime assistant Jerry Keefe to head coach.

“My opportunity came quickly, as soon as that happened, I talked to Jerry about this opportunity,” Madigan said. “He’s more than ready, he’s shown that commitment to Northeastern by staying here and maybe turning down some other opportunities. He wanted to be here and be part of this program.

“It was an easy [decision] based on the person he is and the vision we shared together for the program 10 years ago.”

Throughout his time as a player and a coach at Northeastern, Madigan has found much success both on and off the ice, as well as personally and professionally.

During Madigan’s 10 ten-year tenure as head coach, he has led the Huskies to the last three Beanpot titles, as well as three NCAA tournament appearances and two Hockey East titles.

He also led the Huskies to a pair of Beanpot titles as a player and one as an assistant coach. He’s had a hand in six of the seven Beanpot titles the school has won.

“I’ve been fortunate enough to enjoy a wonderful career here at Northeastern, I have had plenty of mentors along the way over my 35 years. When the head hockey coach position came up, I wasn’t at the forefront of that conversation because I hadn’t coached in a long period of time,” said Madigan.

“But the background and the skillset that I have been able to earn here at Northeastern through all those mentors, set me up well to be the head hockey coach and positioned me well to assume the athletic director role. When the opportunity came about, I was really interested right away. Did I have interest in it over my career? Absolutely. You don’t look at that as it’s going to be an opportunity, but when the opportunity presents itself, you look at it real closely and that’s what happened.”

Both Madigan and Keefe expect the transition behind the bench to be a smooth one. As Madigan’s first hire after he took over behind the Huskies’ bench in 2011, Keefe and Madigan have shared similar visions for the program since.

Madigan always knew he wanted to step into that role eventually, but wasn’t sure it would be this soon. However, opportunities don’t come along that often, so he had to seize. It was helpful knowing he had Keefe behind him. Keefe wasn’t immediately named Madigan’s successor, but it wasn’t a well-kept secret that Keefe would eventually be the guy. It was Madigan’s first official duty as AD.

“That excitement I share today comes from 10 years of working very closely with Jerry Keefe. During that time period we worked on establishing a vision for the program, we established a culture that we wanted to see this program have and continue to build on year-to-year,” Madigan said.

The Huskies are coming off a 9-8-3 season. It was a tough season for the Huskies who had the start of their season delayed on two different occasions due to COVID-related issues on campus. The Huskies finised sixth in Hockey East before losing to the eventual tournament and national champions Massachusetts in the Hockey East playoffs.

“As far as moving forward, we’ve won two Hockey East Championships, three Beanpots in a row, been to the NCAA tournament three times. Now, it’s just about advancing and taking that next step in the NCAA Tournament,” Keefe said. “I’m really excited about this group next year. I couldn’t ask for a better captain for a first-year head coach than Jordan Harris and our leadership group. We’re excited and we’re fully expecting to have a big year next year.”

The fact that Keefe has been a part of the Huskies’ coaching staff for 10 seasons now, and his comfort level with the returning student-athletes, shouldn’t cause many bumps in the road as the program transitions to a new era of Northeastern hockey. His resume is strong, having also been part of Team USA coaching staffs at various international tournaments.

For the new student-athletes coming into the program, the ones who have to yet to play under coach Keefe, his message is simple.

“Make sure you’re prepared to be held accountable by not only me, but the players on the team,” Keefe said. “We set a certain standard here at Northeastern and our older guys understand that standard.”