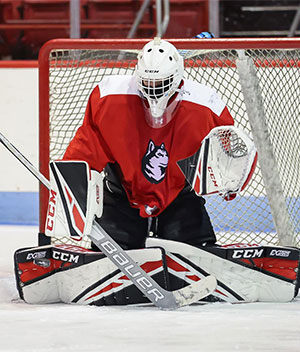 Devon Levi has always focused on himself, and he’s always trusted the process. That process has brought him to Northeastern, and more recently, the world stage.

Last season he played for Jason Clarke and the Carleton Place Canadians in the Jr. A CCHL. During the season, the team of teenagers traveled to Division III Oswego for an exhibition game during Oswego’s homecoming weekend. Levi was pulled after two periods and his team got walloped, 9-4.

“He told me that he wasn’t ready for D-I and he needed to work on this, this and this, and maybe we should call (Northeastern) and ask about pushing him off for a year,” Clarke told TSN. “I told him to slow down. We knew he had some things to work on, but he had such a strong work ethic and drive, let’s see where he stands after the Jr. A Challenge.”

Fast forward almost 12 months, and Levi was the starter for Team Canada at the World Juniors in December. The team fell short of the gold medal against the U.S., but Levi was suddenly starring on the world’s biggest hockey stage for players under 20 years old. He went from a relative unknown to securing the starting job and never letting it go, a rarity for an NCAA goalie on Team Canada.

Soon, he’ll hopefully make his debut for the Huskies. Levi fractured a rib against Germany and he played with that injury the rest of the tournament. That delayed his triumphant NCAA debut, which had already been delayed because of the pandemic forcing Northeastern to start its season after Levi had left for World Juniors.

“It’s getting better for sure,” Levi said. “I’m just taking it day by day and focusing on recovery.”

Northeastern has also been “paused” again since Jan. 13, further setting back Levi’s debut. Northeastern is currently scheduled to play this week against Boston College.

Clarke knew that Levi had something special. He recruited and committed to Carleton more than a year out, which is not typical in that league. He showed up last season in the CCHL and he had one of the best seasons — maybe THE best season — in league history, posting a 34-2-1 record with a 1.47 goals-against average and a .941 save percentage.

“He’s always been known as being very quick and he reads the play well,” Clarke said. “One thing that makes him special, being undersized, is he reads the puck through traffic well. He’s an unbelievable puck tracker. He’s only 6-feet, but he plays much bigger than that.

“He is 100 percent the most mentally-tough kid that I’ve ever seen in my life. He’s a great kid to be around and he’s just nails.”

At the World Juniors, the loss to the U.S. in the finals was Levi’s only blemish in the tournament. He helped Canada go 6-1 and he posted a 0.75 goals-against and a .964 save percentage.

No, those aren’t typos.

When Levi was first selected, he wasn’t even considered the top candidate to start for Team Canada. But just as he has at every other level, he impressed the staff once they were on the ice and they soon realized what they had.

“I just focus on controlling what I can control,” he said. “Everything fell into place from there. I was fortunate that my coaches believed in me. I know it wasn’t easy for them to make that move and believe in a guy who is coming from college, and I know I was probably a little under their radar because they’re more present in the CHL, so I owe them a lot of thanks for believing in me.”

When he arrived in Team Canada’s bubble for the extra-long training camp, he was rooming with Alex Newhook (Boston College) and Dylan Holloway (Wisconsin) while passing through quarantine.

“Playing for Team Canada was a dream since I’ve been able to walk,” Levi said.

Long before the World Juniors and college scholarships, Levi was still working out against some of the best players in the world. Alex Killorn, a former Harvard forward who is now with the Tampa Bay Lightning, was one of several NHL players who would return to workout with Levi’s coaches in the summer. At 14 years old, he was invited on the ice to be their goalie.

“That was the highlight of my week every week,” he said. “I was super lucky that they came back to train at our rink and with my coaches. A lot of NHL’ers would come back and train with my coaches, who had them in midget. My coaches asked me to go on the ice for a few summers and it definitely helped in my development seeing those shots. Plus, it was a lot of fun. I always looked forward to that.”

With the CHL shut down, Canadian players were subject to a long training camp prior to the World Juniors. The extra-long camp is why Michigan defenseman Owen Power didn’t play in the tournament, according to head coach Mel Pearson. But Levi and most of the other NCAA-selected players did compete.

Now that it’s over, Levi believes the games not only made him more prepared for the big stage at Northeastern, but the time spent training in the bubble made him a better goaltender.

“I learned so much in those two months,” Levi said. “I improved for sure. I feel like I’m a much better goalie now than when I got there. (Goalie coach) Jason LaBarbera spent a lot of time with us and fine-tuned things in my game that I feel really good about. He’s a great coach. I learned a lot about myself and now I’m excited to play college hockey. I want to take what I learned there and apply it in our games.”

If Levi can have as much immediate success as he had with Team Canada and Carleton Place, the Huskies are in for something special. But personal success is not Levi’s focus. Far from it. The only number that matters to the Florida Panthers’ draft pick is what it says next to the win column in the standings.

“I’m just a guy who will give my heart and soul to the team,” Levi said. “I’ll do everything I can do to win. Hopefully, I’ll be able to be a piece of the puzzle and hopefully, we can win a championship.

“I just focus on what I have to do. I don’t get tied up with the uncontrollable stuff. My job is to stop the puck, and I do whatever I can do to stop it. I give myself to the game, I guess you can say I’m married to the game. I love doing it. I love playing, so it’s easy for me.”

LeBron James dismissed Zlatan Ibrahimovic's criticism of his social activism and pointed out the hypocrisy of the AC Milan star's comments on Friday.Ibrahimovic,...
Technology

Update February 26th, 2021 12:05PM: Best Buy still has both consoles in stock, but the retailer is releasing small waves of...

February has not been kind to the Boston Celtics, with the team falling to 15-17 after going just 5-9 in this month, leaving...
View Post
Technology

The PS5 is back in stock at Best Buy

Sony’s latest gaming console, the PS5, is one of many gaming gadgets that are pretty hard to find in stock right...
View Post