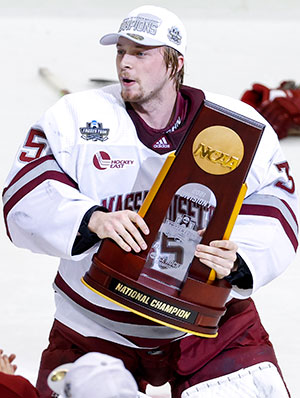 PITTSBURGH  After spending two months leading into the Frozen Four being the most dominant goaltender in college hockey, Filip Lindberg found out news one week prior that has been every player’s worst nightmare this season — COVID would keep him out of the biggest game of the year.

Luckily for Lindberg and his teammates, the contact tracing issue that forced Lindberg to stay in Amherst, did not shut down the entire team. It “only” meant the Minutemen had to survive the two-time defending national champions Minnesota Duluth in the national semifinal.

The way the protocols work, Lindberg had to test negative eight days in a row before being allowed back near the team. So he sweated out the last week while in quarantine in an Amherst hotel room.

“The day I found out, that was probably the worst days I’ve had,” Lindberg said. “That was a nightmare. … It was a tough eight days. Watching the boys play on Thursday was, I was so nervous. We were all back at the hotel (in Amherst) watching. That was something I’m going to remember for the rest of my life.

“I was really nervous and (took) a walk too outside. I couldn’t watch. I could but I just had get some fresh air.”

After the team won its dramatic OT thriller Thursday, Lindberg knew he’d be going to Pittsburgh. What he didn’t know, however, was whether he’d be back between the pipes, of if it would be Matt Murray, who played well against Duluth.

UMass’ coaching staff wasted little time, however, making that decision. In a clear vote of confidence not just in Lindberg’s playing ability but in his personality and resiliency, Lindberg got the call Friday while he was driving to Pittsburgh.

“I was in the car. We drove eight hours from Amherst. And I was in the car alone with my driver,” Lindberg said. “And our goalie coach (Jared DeMichiel) Facetimed me and asked me how I feel. I said I feel good. I napped for six hours, it was 2:00 p.m.

“I had eight days inside a hotel room. I was stretching a lot and thinking a lot about hockey. And I was prepared. I got to rest for eight days, too, which was nice. I mean nothing to complain. I was ready to go. And I had the mindset of, if I got the chance to play after this COVID incident, I would, that I would get the job done.”

All Lindberg did then was take the bull by the horns and shut out St. Cloud State, 5-0.

He shook off some early jittery play from his D-men, and fellow Finn Veeti Miettinen hitting the crossbar in the first period. Then he got run by St. Cloud State’s Nick Perbix and turned his ankle a bit.

“To have to miss a semifinal,” coach Greg Carvel said, “to not be able to skate most days, come in and get absolutely railroaded a couple minutes into the game, and he hurt his ankle on that play. But he was so good this year because of his mental toughness. That was the problem in the past.”

In the process, Lindberg made history in more ways than one — he is the first European to win a national championship game in college hockey.

“I had no clue. That’s pretty cool. I don’t mind that,” Lindberg said.

The roots of Lindberg’s historic season really go back to a year ago. After two pretty good seasons with the Minutemen, including playing in both Frozen Four games in 2019, Lindberg told Carvel he needed to play more. Until then, he had split a lot of time with Murray, even though Lindberg did get the bulk of work in the 2019 run.

Carvel was angry with Lindberg, because to that point, he didn’t feel he earned the right to make such a comment.

“Then be better,” Carvel told him.

Lindberg took the message to heart. Instead of reacting negatively to his coach’s challenge, he realized that he indeed needed to get mentally stronger, and set about making that happen.

The result was what you saw in the last three months.

“He was very inconsistent and to me it was because he was mentally he would get, whatever, anxious. But he dealt with that. And he found a way to fight through it. And, boy, was he good.

“I think he’s the unwritten story of college hockey this year.”

Well, we’d all have loved to know more about Lindberg. In his post-game press conference, his effervescent personality came shining through. But because of COVID, reporters have only had limited access to players this year, and Saturday night was no different. Normally this reporter would spend 20 minutes personally talking to Lindberg after a game like this and get all the thoughts we’d all love to hear.

But enough came through in the availability Saturday night to demonstrate that his personality is a large driver of his success.

And now the story has been written, coach.