SAN FRANCISCO – The first time Michelle Wie West left her daughter to go to work she cried. That’s not unusual, of course. In Wie West’s case, she was headed to the first tee for Round 1 of the Kia Classic, her first official round on the LPGA in 643 days. Wie West was staying on property at the Aviara Resort in Carlsbad, California, and when Bo Wie came out on the balcony with granddaughter McKenna to give a wave, Wie West broke down crying again.

“I was like what is happening to me?” recalled Wie West. “Hormones?”

She promptly hit her next shot into the water.

Jane Park first met Wie West during a rain delay at the 2002 U.S. Girls’ Junior at Echo Lake Country Club in Westfield, New Jersey. She invited Wie West to play a game of spoons in the locker room.

“She was kind of sitting there alone,” said Park. “We all knew that she was a prodigy. I think she just felt like the odd one out because she was new to the scene.”

Wie West, 31, gave birth to Kenna two months before Park had daughter Grace. They text often, with Park checking to see if a new rash or a new sound is normal. Park was paired with Gerina Piller at the Hugel-Air Premia LA Open in April and asked how long it took before she felt back to her former mind and body after giving birth to son A.J.

“She said ‘You just need to remember that you made a freakin’ life in your body,’ ” said Park. “None of these other girls are thinking ‘Did I bring enough diapers?’ in the middle of the round.”

The 2021 U.S. Women’s Open is being played 15 minutes away from Wie West’s home in San Francisco. She didn’t get out there much ahead of the championship because the Lake Course seemed too taxing to carry her bag and push Kenna. That’s how she typically practices at Lake Merced. Kenna tracks every ball.

Wie West called her 2014 U.S. Women’s Open victory at Pinehurst “life-changing” and remembers every second of the day.

“I feel I carried myself differently from that moment forward,” she said, “because of that self-validation.”

The floodgates never opened after that first major title. An LPGA victory in Singapore is all that has followed, bringing her career victory total to five. Still, she remains the only household name on the LPGA in America.

She’s not the same person she was back then, of course. Couldn’t be, really, after getting married and giving birth and putting family above all else.

The shift began two years ago, she said, after she stepped away from the tour due to injury. Wie West fell on her left wrist while running backwards at age 16, fracturing three bones. Three years later, while practicing down in Florida, she rested her right hand on the top her golf bag and a club smashed down on it, resulting in a bone contusion.

Physically, it’s been a great battle ever since.

This most recent break from the tour helped Wie West see the game and her role in a different light. She ran for a Player Director position on the LPGA board, coming on at a crucial time as the tour hired its next commissioner.

“Now,” she said,  “I have the mental and emotional capacity to see things from a broader perspective.”

Husband Jonnie West and his legendary father, Jerry, play a role in that, too. It was Jonnie who helped pen Wie West’s response to Rudy Giuliani’s disturbing story on Steve Bannon’s “War Room” podcast last February.

“I knew what I wanted to say,” said Wie West, “but I just couldn’t get it out. (Jonnie) told me, you have such a great opportunity to say something that really matters right now.”

In the past, Wie West admits, she would’ve probably stayed quiet.

Justin Thomas introduced the couple, and they quickly realized that they had many mutual friends. The pair connected shortly before Wie West went on a girls’ trip to the Bahamas and she couldn’t stop talking about him. She soon flew to San Francisco to see him on her way to up Portland.

Friend Jeehae Lee, a former LPGA player and Yale grad who is now CEO of Sportsbox AI, spent a brief time as Wie West’s manager and saw the couple interact in those early days in her San Francisco living room.

“The first time they met in person they seemed so comfortable with each other,” said Lee. “It wasn’t being too polite or hiding behind something. They were just comfortable being themselves, which I felt was such a good sign. … They really are each other’s go-tos.”

Walking outside the Chase Center, home of the Golden State Warriors, Wie West marveled at the amount of money that’s poured into men’s professional sport. She was shocked the first time she went to a PGA Tour event.

When people argue that LPGA purses are lower because of lower viewership, it’s an unfair comparison, she said, because of how much is invested.

“The men’s sports create a better product just on the number of cameras alone,” she said. “Our game looks slower, our players look slower when in fact, we’re not slower at all. It’s because we don’t have the ability to switch back and forth, so you end up watching the players’ entire routine, which people now don’t have the attention span for that.”

Wie West dabbled in on-camera work when she was away from the tour, giving her even more insight into the discrepancies between the men’s and women’s game. Back-to-back U.S. Opens at Pinehurst in 2014 were eye-opening in that regard as well.

Wie West noted that in player meetings, LPGA commissioner Mike Whan consistently drilled into their heads that just because they’re playing for a $1 million first-place prize now, nothing is guaranteed – “you need to do the work.”

She finds her father-in-law’s hardware at Prime 44 West, a steakhouse at the Greenbrier that honors the West Virginia native, inspiring but not as much as his stories from the past. She was shocked to learn that when Jerry West first joined the league, everyone in the NBA had a second job. Courtside tickets at Lakers games went for $7.50.

“Looking back at our 13 founders and knowing what they did,” said Wie West, “that’s not that long ago either.”

Wie West never pictured herself playing the LPGA as a mom. Having a daughter changed that. Everything she does now is with an eye toward building a world that’s better for Kenna.

Living in the Bay Area, Lee says, gives Wie West even more of a platform to take on social issues. Traveling the world with the towering star gave Lee a unique perspective on her fame.

“It’s one thing to be in Toledo, Ohio, with her,” said Lee, “versus Singapore or Seoul, South Korea.”

So many stares in Tokyo, with fans asking for autographs or pictures on the streets, at airports and in hotel lobbies. Even at a recent USGA video shoot at one of Wie West’s local favorites, Dumpling Time, near the Chase arena, a couple from Hawaii asked to take a photograph.

“Honestly, I just remember feeling somewhat overwhelmed and protective,” Lee said of the moments when it was difficult to get through crowds. “I was somewhat of a bodyguard at some points.” 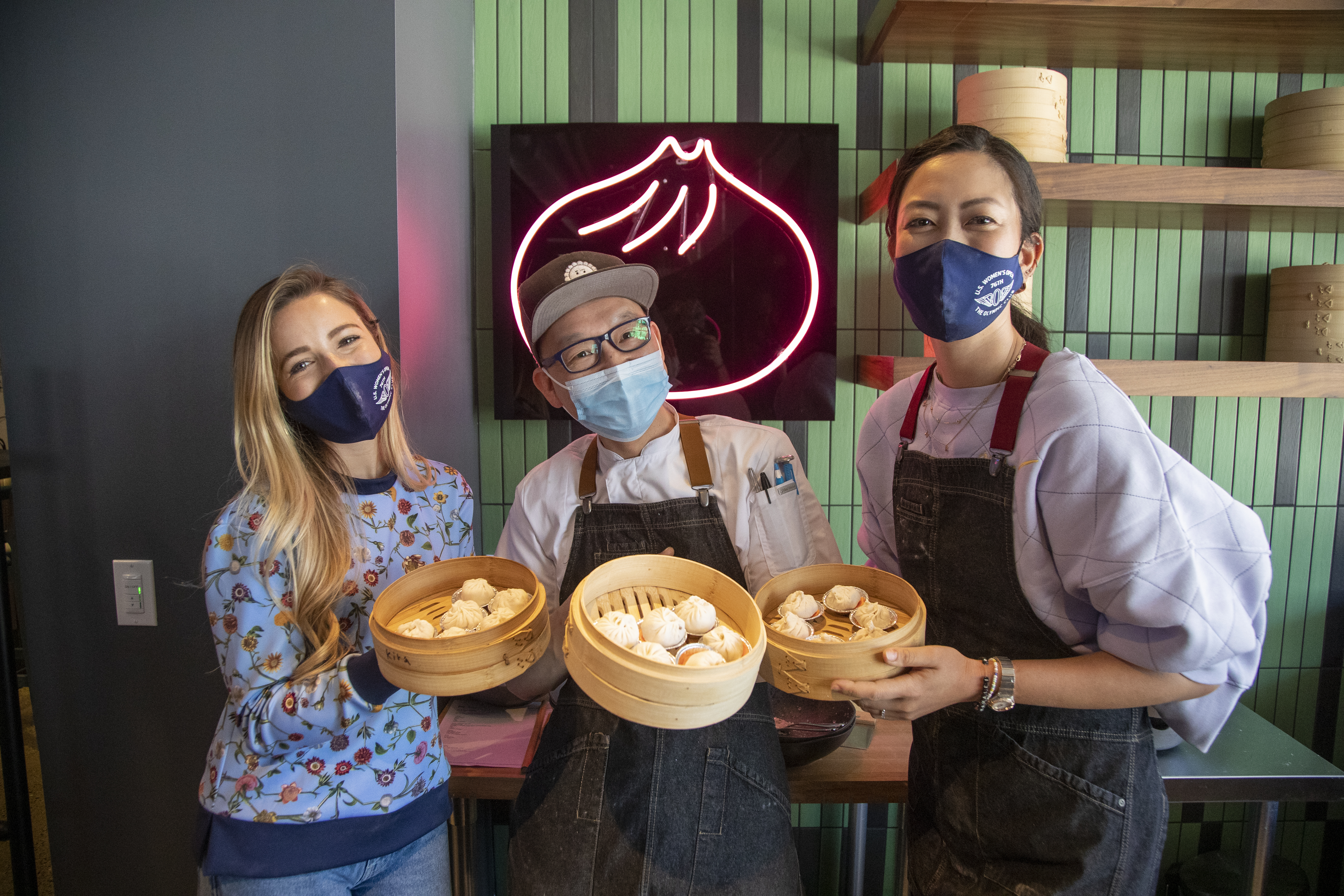 Then it’s back to feed her dinner, give her a bath, put her to bed and make dinner for the adults. She’s been into making sushi lately and has a supplier deliver fresh fish to the house.

Wie West recently hosted a taco night. She had two different fillings, Lee noted: Korean barbecue beef and shrimp. Nothing on Wie West’s table comes out of a jar. She even makes her own salsa.

“She loves having people over, and she is so domesticated,” said Lee. “She will just whip up something amazing in the kitchen without having to go grocery shopping that day. I raid her pantry and fridge like nobody’s business.”

Wie West’s parents have been staying with them lately to help. Five weeks out from the USWO, she felt that she needed to dedicate more time to practice.

To do that though, she also has to work through the guilt.

Juli Inkster, LPGA Hall of Famer and mother of two, said it took a long time to learn how to balance motherhood with what it takes to win at the highest level.

“When you leave them for a week,” said said, “you’re thinking ‘Oh my God, are they going to remember me when I get back?’ ”

Laura Baugh played the tour as a single mother of seven, traveling in a van. She breastfed them all and even home-schooled. 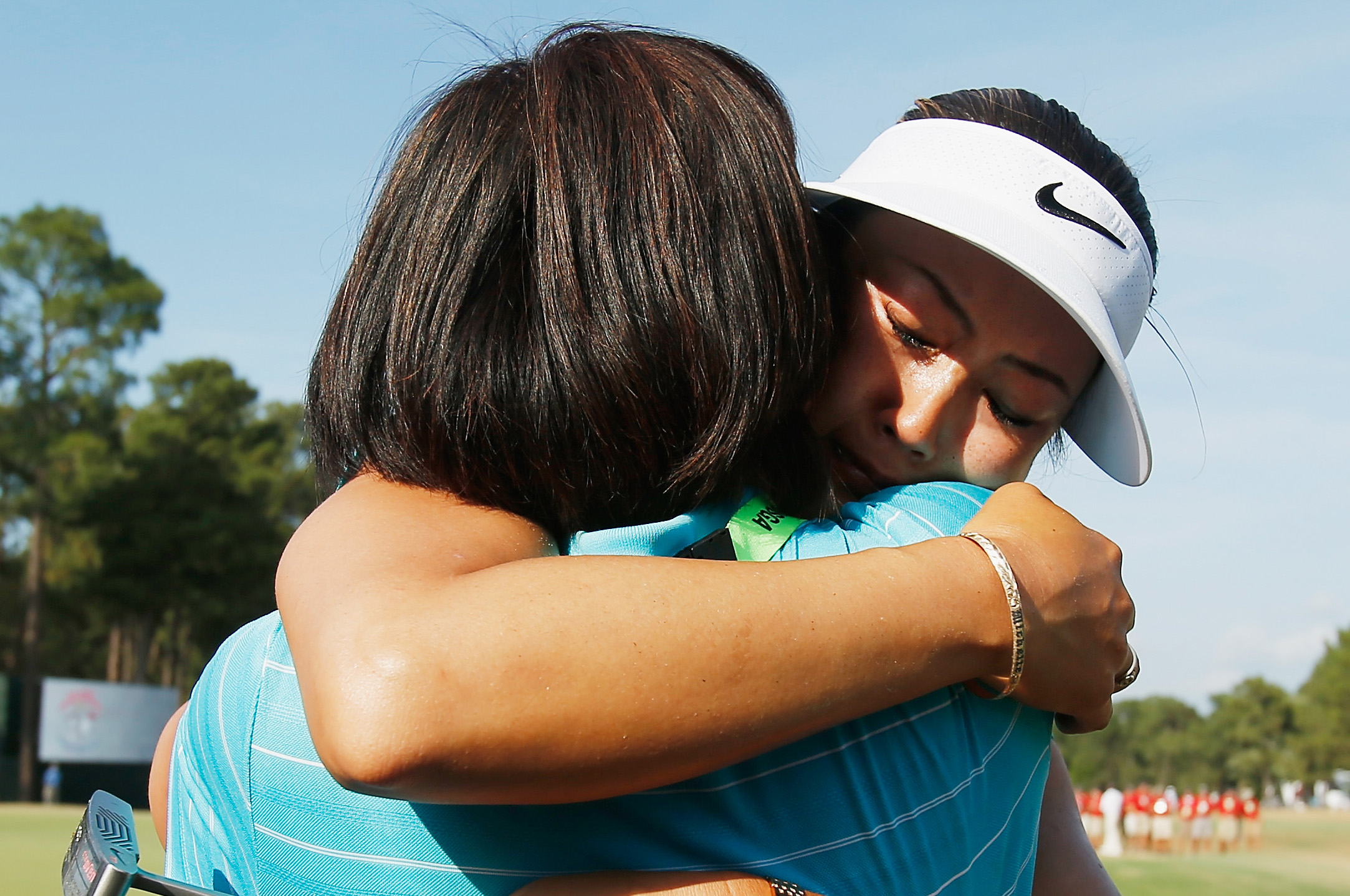 Michelle Wie celebrates with her mother Bo on the 18th green after her two-stroke victory at the 69th U.S. Women’s Open at Pinehurst Resort & Country Club, Course No. 2 on June 22, 2014 in Pinehurst, North Carolina. (Photo by Scott Halleran/Getty Images)

Wie West hasn’t competed on the LPGA since the LA Open in late April, dropping out of the LPGA match play event in Las Vegas due to family commitments.

Regardless of how much Wie West plays in the future, Lee knows that her friend will continue to move the needle in different ways, using her vast network in and out of golf to bring about change.

“She can use that platform to take issues head on,” said Lee, “to speak boldly about topics that people are too afraid to speak out about. … She can bring money, she can bring attention, influencers – both in and out of golf – in a way that very few other athletes can.”

One day, Wie West hopes Kenna looks back on the current pay gap between the genders in golf the same way she views that $7.50 court-side Lakers ticket – absolutely wild.

Perhaps Wie West’s greatest legacy is yet to come.