Nelly Korda all smiles after career-best round at Meijer Classic


BELMONT, Michigan — When Nelly Korda was making the turn at Blythfield Country Club on Saturday, a loud horn sounded.

It was a weather delay. Something Korda dreaded, as she shot 5 under on the front. But the 45-minute break didn’t slow her down a bit. She shaved five more shots off her score in the back half and finished the day with a 10-under 62, a career-best. She’s currently sitting with a three-shot lead at 20 under heading into the fourth round of the Meijer LPGA Classic.

Korda made 11 birdies on the day, tied for the second-most in LPGA history. Just two less than Annika Sörenstam’s 13-birdie performance 20 years ago en route to a 59.

“I was sticking it close. Just I guess was feeling it out there today,” Korda said. “I had a lot of close putts, I was really dialed in with my irons and wedges. That helps when you have shorter putts.”

She started the day five shots off Leona Maguire’s lead, but wasted no time clawing her way back up the leaderboard. She started her round with three straight birdies. She shot her lone bogey of the day on the 11th hole, just one hole after restarting from the weather delay.

Though her only slip-up on the course came shortly after the delay, she said it didn’t affect her play much. She felt confident over her ball and the damp greens let her aim straight for the pin, knowing the ball wouldn’t roll far after it hit. 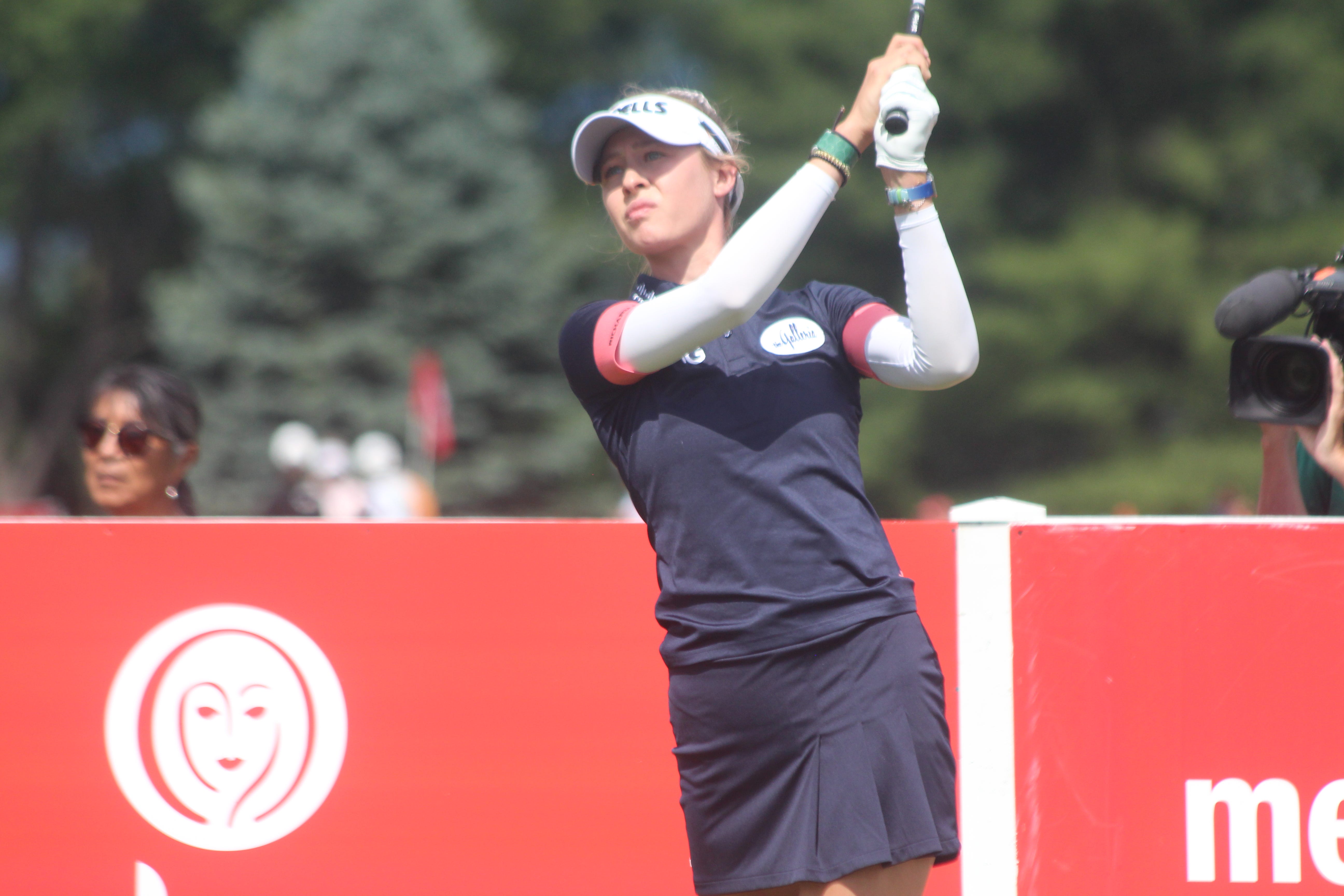 Nelly Korda hits a tee shot during the third round of the Meijer LPGA Classic. (Photo by Will Kennedy/Holland Sentinel)

“Definitely got a lot softer, you can be a lot more aggressive on the greens,” Korda said. “The greens get bouncy, they’re a little slower but bouncy. For them to be soft I can just aim at the hole and shoot at it.”

While Korda came back on the course like nothing even happened, the same could not be said for Madelene Sagstrom. She was rolling through her first nine holes, matching the leader’s 5 under. But after the delay, it was a bit slow for her.

Though she played a bogey-free round, she didn’t birdie again until the 16th. She followed it up with another birdie on 18 to shoot a 7-under 65. That’s good enough for third place heading into the final round, but if it weren’t for the bad weather she felt she could’ve scored lower.

“I wish I could have kept going because I was playing so well,” Sagstrom said. “After you stop and then we didn’t get to warm up, I was just trying to find my momentum again and I’m happy I got those 2 under after the delay.”

Maguire, who had a comfortable three-shot cushion heading into the day, wasn’t able to protect her lead. She finished her round 2 under and sits in second place overall at 17 under for the tournament.

Her holes from tee box to the dance floor was solid all afternoon. But earlier in the week when she was able to drain putts, on Saturday she wasn’t able to. As soon as she signed her scorecard she hit the practice green trying to lock in for the final round tomorrow.

“I played pretty well from tee to green felt like. Gave myself a lot of chances. Just didn’t hole any putts today at all, couldn’t really get it going,” Maguire said. “You have to hole putts around here to make some birdies. I didn’t really do that.”

Though she said she’d have like to stay in the lead heading into Sunday, it might not all be a bad thing. With Korda taking over atop the leaderboard, the Ireland native said she’ll be able to play free in the final round.

She’s still in search of her first LPGA victory, but she knows all eyes won’t be on her when they tee off tomorrow. They’ll be on her playing partner.

“All the pressure is on Nelly. Everybody expects Nelly to win tomorrow. She’s ranked [top 5] in the world, nobody expects me to do anything,” Maguire said. “I’ve really got nothing to lose. I can just go out and play golf and see what happens.”

Korda’s sister, Jessica, had a solid day herself. She shot 5 under Saturday and is tied for 12th, eight shots back of the lead. She knows that most of the field has a long way to go to catch Nelly.

But at Blythfield, where players are consistently shooting well under par, anybody can get hot at the right time. This week, it’s all come down to how the greens have rolled.

“Out here the greens are slow so it’s just trying to get the putts to the hole. That’s kind of it,” Jessica said. “I think a lot of us out on the golf course are leaving a lot of putts center and a little short so gets a little frustrating.”

For Nelly, she hopes to keep to momentum rolling into Sunday. After missing the cut in the US Open, her only missed cut of the year, Saturday’s round helped boost her confidence sky-high.

Now the trick is trying to keep it there tomorrow.

“Every day a new day, there is still 18 more holes,” Korda said. “There is a lot of girls bunched up, a lot of birdie opportunities, so take it shot by shot and see how it goes.”

In this edition of In The Circle, Eric Lopez and Victor Anderson preview the Olympics Softball event. Team USA will play its first...
Running

Watching the 2021 Olympic track and field competition will be easy, but not necessarily simple.It will be easy in that NBC plans to...
Swimming

Olympics: Who is the Female Swimmer of the Games?

Olympics: Who is the Female Swimmer of the Games? There would be little argument if we declared that the best male swimmer in...

In this edition of In The Circle, Eric Lopez and Victor Anderson preview the Olympics Softball event. Team USA will play its first...
View Post
Running

Watching the 2021 Olympic track and field competition will be easy, but not necessarily simple.It will be easy in that NBC plans to...
View Post
Swimming

Olympics: Who is the Female Swimmer of the Games?

Olympics: Who is the Female Swimmer of the Games? There would be little argument if we declared that the best male swimmer in...
View Post
Volleyball

4 Reasons why Playing Volleyball can Benefit your Health

To maintain a healthy lifestyle and keep fit, playing volleyball, whether it’s on a beach, on grass, or on an indoor court, can...
View Post
Lacrosse

Why Jeff Teat Is Making His Case for PLL MVP

PLL MVP? More like M-V-Teat! The title of No. 1 pick comes with a lot of expectations. You are expected to be the guy...
View Post