GREEN BAY, Wis. — Aaron Jones is either next up for a contract extension or should prepare himself to hit the open market as a free agent next year.

Now that the Green Bay Packers extended left tackle David Bakhtiari‘s contract — less than three months after they did the same with defensive tackle Kenny Clark — general manager Brian Gutekunst can turn his attention to his starting running back if he so chooses.

That’s not a given, though, considering the financial position Jones has put himself into with his play over the past season and a half.

Signing Clark (to a four-year, $70 million deal in August) and making Bakhtiari the highest-paid offensive lineman in NFL history with a four-year, $103.5 million extension that included a $30 million signing bonus were practically must-moves for Gutekunst. Letting either one walk might have made it absolutely necessary to use a first-round pick in 2021 on a replacement.

But Jones — or any other running back for that matter — is more complicated. While former Packers general manager Ted Thompson found a gem with Bakhtiari in the fourth round, it’s much harder to find a franchise left tackle later in the draft than it is a running back. Jones is a perfect example as a fifth-rounder in 2017, the same draft that brought his backup, Jamaal Williams, in the fourth round. Williams also is in the final year of his deal.

What’s more, Gutekunst protected himself at the position when he used his second-round pick on AJ Dillon in this year’s draft.

Gutekunst also has center Corey Linsley and cornerback Kevin King to think about, although King could be playing his way out of an extension based on his injury history. He missed his fifth straight game Sunday because of a quad injury. This offseason, an NFL scout and a longtime assistant coach both ranked the Packers’ free-agent priorities to re-sign in this order: Bakhtiari, Clark, Linsley, Jones and then King.

With the salary cap expected to decrease — it can’t go lower than $175 million — to help offset lost revenue from the COVID-19 pandemic, the puzzle will be even more difficult for general managers and cap managers to put together. The Packers had about $8.4 million in remaining cap space for 2019 before Bakhtiari’s deal. Any unused space can be carried over to next year.

The complete ramifications of Bakhtiari’s extension won’t be known until the full contract is available — a source said that combined with the $30 million signing bonus (which will be prorated for cap purposes over five seasons), the deal will pay him $64.5 million by the end of the 2022 season and $82 million by the end of 2023 — but Gutekunst shot down any suggestion that it would prohibit him from moving on Jones or any other extensions.

More flexibility than if the Packers used the franchise tag on Bakhtiari, for sure. Beyond that, Gutekunst wouldn’t explain further.

“There’s just some avenues as we move forward that allows us to kind of reduce his number in the next couple years that maybe we wouldn’t have been able to do if we couldn’t come to agreement,” Gutekunst said. “Again, he’s an elite player at an elite position, and we felt it was important to lock him up, and I think it helps us go forward with some of the other things we want to do.”

The Packers would pick up $22 million in cap space if they moved on from quarterback Aaron Rodgers next offseason (and designated him as a post-June 1 move). But with Rodgers playing at an MVP level, his spot for 2021 seems more secure than it was immediately after they drafted quarterback Jordan Love in the first round this year. 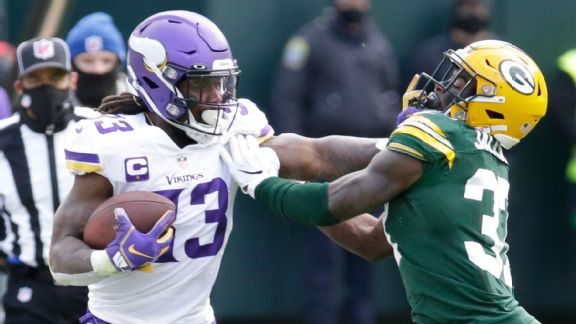 Jones’ history of minor injuries — last year was the only time in his career that he has played in every game, and he has already missed two games this season because of a calf injury — might keep him from earning Dalvin Cook/Alvin Kamara money ($12 million to $15 million per year).

But his importance to the offense can’t be understated. The Packers’ 24-20 struggle to victory Sunday against the Jaguars was an example.

One of coach Matt LaFleur’s immediate takeaways after the game was this: “[We need to] make sure we’re getting our best players in position to make plays and get them the football. I look at the stats, and I see that Aaron Jones has not enough touches, Jamaal Williams doesn’t have enough touches.”

There’s another factor to keep in mind, too. With the shrink in the cap, teams could make more cuts before the league year starts in March and those new street free agents could come at a discount, so Gutekunst might want cap space in hand for that, as well.

“The players that might become available to us during the March period may be a little different than it has in the past, and we want to have some flexibility to do those things if we can,” he said. “So I think it’s a combination of that. We’ve always believed that we’d like to take care of our own first — that’s very important to us. But we’d also like to have some flexibility to see what the market might bring in March.”

Universal Pictures is in some hot water with actor and comedian Fiazon Love suing the studio over allegations of racial discrimination. Pertaining to...
Trending News

We’re just a few days away from the special Euphoria holiday episodes, and the hit HBO series has blessed us with an early...

Universal Pictures is in some hot water with actor and comedian Fiazon Love suing the studio over allegations of racial discrimination. Pertaining to...
View Post
Trending News

We’re just a few days away from the special Euphoria holiday episodes, and the hit HBO series has blessed us with an early...
View Post
Fashion

Retailer Cozy, soft-to-the-touch sweaters are a closet requirement. If you find the right one, a good knit can be a stylish staple for at-home...
View Post
Basketball

Veteran point guard J.J. Barea has agreed to re-sign with the Dallas Mavericks on a one-year deal for the veteran's minimum of $2.6...
View Post