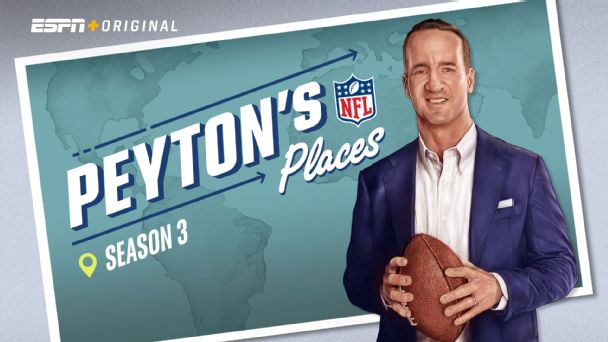 The nine-episode series revisits seminal moments in NFL history through conversations with former players, coaches and other key figures about football and its cultural impact.

Peyton discovers the reason the Detroit Lions haven’t won a Championship since 1957 is “The Curse of Bobby Layne”. With the help of famed Lions fans, Keegan-Michael Key and Jeff Daniels, Peyton sets out to lift the curse. Watch now

Peyton finally gets the “sports car” he’s always dreamed of — an Indianapolis Colts helmet car — and takes it for a spin at the Indy 500. Jeff Saturday and Pat McAfee join the ride down memory lane to find out what happened to NFL helmet cars and makes a plea for the NFL To bring them back. Watch now

Peyton meets up with QB and former shortstop Russell Wilson to learn what it takes to become a two-sport athlete. The pair discuss two-sport all-stars of the past and Peyton steps into the batter’s box. Watch now.

When his son, Marshall, spends the day sick at home, Peyton tells him a football version of The Princess Bride. A tale of “dreamcatchers”, wide receivers Peyton dreamed of throwing a pass to, comes to life with the help of Lance Alworth and Calvin Johnson. Watch now.

Everyone loves a good underdog story and Peyton finds two of the NFL’s best longshot stories at a grocery store in Iowa and at an ice fishing lake in Minnesota. Kurt Warner and John Randle recall their journeys from humble beginnings to the Hall of Fame. Watch now.

Episode 6: Flight of the Mayflowers

One city’s heartbreak is another city’s dream as Peyton learns the real story behind the most notorious move in sports history – the Colts leaving Baltimore for Indianapolis. Peyton surprises die hard Baltimore Colts fans and then meets up with an old friend in Indianapolis to explore what really happened the night the Colts left town.

Episode 7: Do you Believe in Miracles?

Football’s a game where fans truly can believe in miracles. Peyton meets up with the players who pulled off two of football’s greatest: Herman Edwards and Ahmad Rashad.

Peyton shows that in football, screwing up can make you a hero. Keegan-Michael Key and Jim Marshall join Peyton to reminisce on football’s greatest follies.

Episode 9: Football Under the Christmas Tree

Peyton is making a list and checking it twice to show how a Christmas present changed football forever and bringing some holiday cheer to Philadelphia’s boo birds.