Fifth seed Tsitsipas broke new ground on the terre battue after fighting for three hours and 37 minutes against Alexander Zverev, claiming a hard-fought win in five sets 6-3, 6-3, 4-6, 4-6, 6-3 to reach his first Grand Slam final. But while Djokovic played fewer sets, he undoubtedly had the bigger mountain to climb in order to defeat 13-time Roland Garros champion Rafael Nadal.

It was kind of like climbing Mt. Everest, the 2016 champion said afterward. Djokovic’s four-set comeback became an instant classic after he rallied to win in four hours and 22 minutes 3-6, 6-3, 7-6(4), 6-2 to hand Nadal his third defeat in 108 matches at Stade Roland-Garros.

A Deep Dive Into Djokovic And Tsitsipas’ Rivalry

“Each time you step on the court with him, you know that you have to kind of climb Mt. Everest to win against this guy here,” Djokovic said. “I won only once in our eight matches that we ever played in Chatrier here in Roland Garros. I tried to take some positives and some cues from that match in 2015 that I won against him to implement tonight, which worked out very nicely.

“It’s just one of these matches that I really will remember for a very long time.”

By advancing to the final, Djokovic also claimed sole ownership of the second place on the all-time list for most Grand Slam men’s singles finals reached, ahead of Nadal.

After a draining semi-final epic, how much does Djokovic have left in the tank? The toll of taking down Nadal on his home turf has spelled a bad omen for the few who have accomplished it: no one who has defeated Nadal at Roland Garros has gone on to win the title.

It’s a fact Djokovic himself knows all too well: after achieving the feat in the 2015 quarter-finals, he went on to lose to Stan Wawrinka in the championship match. And Robin Soderling, who defeated Nadal in 2009, was also eventually halted in the final by Roger Federer.

“It’s not the first time that I play an epic semifinal in a Grand Slam and then I have to come back in less than 48 hours and play [a] final,” Djokovic assured. “My recovery abilities are pretty good, I must say, throughout my career.

“Obviously my physiotherapist will try to do everything possible so I can be fresh. Because I played enough tennis, I don’t need to train too much. It’s really now just about taking things slowly until the day of the final.”

If Djokovic can find a way to hit the reset button and lift his second Roland Garros trophy, the ramifications could be huge – for Djokovic, for the Big Three’s rivalry, and for the fate of the year-end No. 1 FedEx Ranking.

A triumph on Sunday would lift Djokovic to 19 Grand Slam titles and make him the first man in the Open Era – and only the third in history – to win every major title twice. Aussies Roy Emerson and Rod Laver are the only two men in the sport who have won each Grand Slam twice.

Not only would that write another stunning chapter in the tennis history books, it also means that by Wimbledon, Djokovic could be closing in on title No. 20 and locking in a three-way tie for the all-time record for most Grand Slam singles titles with Nadal and Federer.

Djokovic, who extended his stay at No. 1 in the FedEx ATP Rankings this fortnight, can also eye a major move in the race for year-end No. 1 – which will be based solely on FedEx ATP Race To Turin points this year. Tsitsipas and Djokovic sit in first and second position, respectively, but that could potentially change as Sunday’s winner will be the Race leader.

Should Tsitsipas win, his lead over Djokovic and the rest of the field will grow by 800 points, putting him 990 points clear of the second position. But should Djokovic win, he would be in pole position for a record-breaking seventh Year-End No. 1 finish – ending his tie with Pete Sampras, who finished at the top of the Rankings for six years in a row between 1993-98.

Conventional wisdom says the Serbian’s long experience in championship matches will give him the edge over Tsitsipas. After all, the 18-time Grand Slam champion has already competed in 28 major finals, while this will be Tsitsipas’ – and Greece’s – first shot at major glory.

Djokovic also leads the ATP Head2Head against Tsitsipas by a healthy 5-2 margin. But the signs have been coming together for Tsitsipas, even as he trails in their 3-0 clay-court Head2Head.

Both of their most recent clay-court meetings have been lengthy battles, including their clash in the quarter-finals at the Internazionali BNL d’Italia last month. Djokovic had to rally from a set down as Tsitsipas served for the match at 5-4 in the third set en route to a 4-6, 7-5, 7-5 win. At Roland Garros last year, Tsitsipas willed himself to a higher level after dropping the first two sets against Djokovic, pushing his opponent to the limit in their 6-3, 6-2, 5-7, 4-6, 6-1 battle.

Regardless of the tale of the tape, Tsitsipas won’t be the same player that Djokovic faced less than a year ago at this venue – and Djokovic knows it.

“I know what I need to do. Obviously Tsitsipas, [his] first time in the finals of a Grand Slam. For him it’s a great achievement, but I’m sure he doesn’t want to stop there,” Djokovic said. “He’s in great form. He leads [the] Race rankings, this year. He’s had his best results overall. I think he matured as a player a lot. Clay [is] arguably his best surface.

“We played an epic five-setter last year in the semis here. I know it’s going to be another tough one. I’m hoping I can recharge my batteries as much as I can because I’m going to need some power and energy for that one.”

While Djokovic recharges, Tsitsipas will try to recenter himself after pulling off the biggest victory of his career to reach the championship match a Grand Slam for the first time. The normally passionate Greek player has been totally serene throughout the fortnight – but after his mammoth five-setter against Zverev, he let the emotions flow out as he reflected on his historic achievement.

“All I can think of is my roots,” said Tsitsipas, as tears welled in his eyes during an on-court interview. “I come from a really small place outside of Athens. My dream was to play here and I would never have thought I would achieve it…”

“It was nerve-wracking, so intense, I stayed alive. I went out there and fought. This win means a lot, it’s the most important one of my career so far.”

In his post-match press conference, Tsitsipas elaborated: “It’s reflecting back to the past. Roland Garros has been a historical tournament. It has been an event that I’ve been watching since I was little. My coach, it has been his favourite tournament. I grew up with him. It’s a tournament that we always followed, we always watched. I was mostly emotional for putting myself in that position… For sure that’s the first step. I haven’t finalised it yet.”

That ‘yet’ and that ‘so far’ in his responses are indicative of Tsitsipas’ change in mentality, which has been evident throughout the fortnight and beyond as the Greek player racked up victory after victory.

In Paris, Tsitsipas stayed calm as he scaled his own ‘mountains’ – whether down a set and break points to 31st seed John Isner in the third round, or after losing the third and fourth sets to a zoned-in Zverev in the semi-finals. His never-say-die mentality and calm execution have led him to a tour-leading 39 victories on the season, including 22 clay-court wins.

“I’m someone who fights. I was not willing to give up yet,” Tsitsipas said of his semi-final recovery. “I think I did [a] few things right that worked in my favor. I was still alive. I was still able to come back to the match.

“I was trying to be in a good relationship with myself and get encouraged and push forward for something good to happen. I knew I was not done at that point, I had more to give… All I had to do was put in the concentration.” 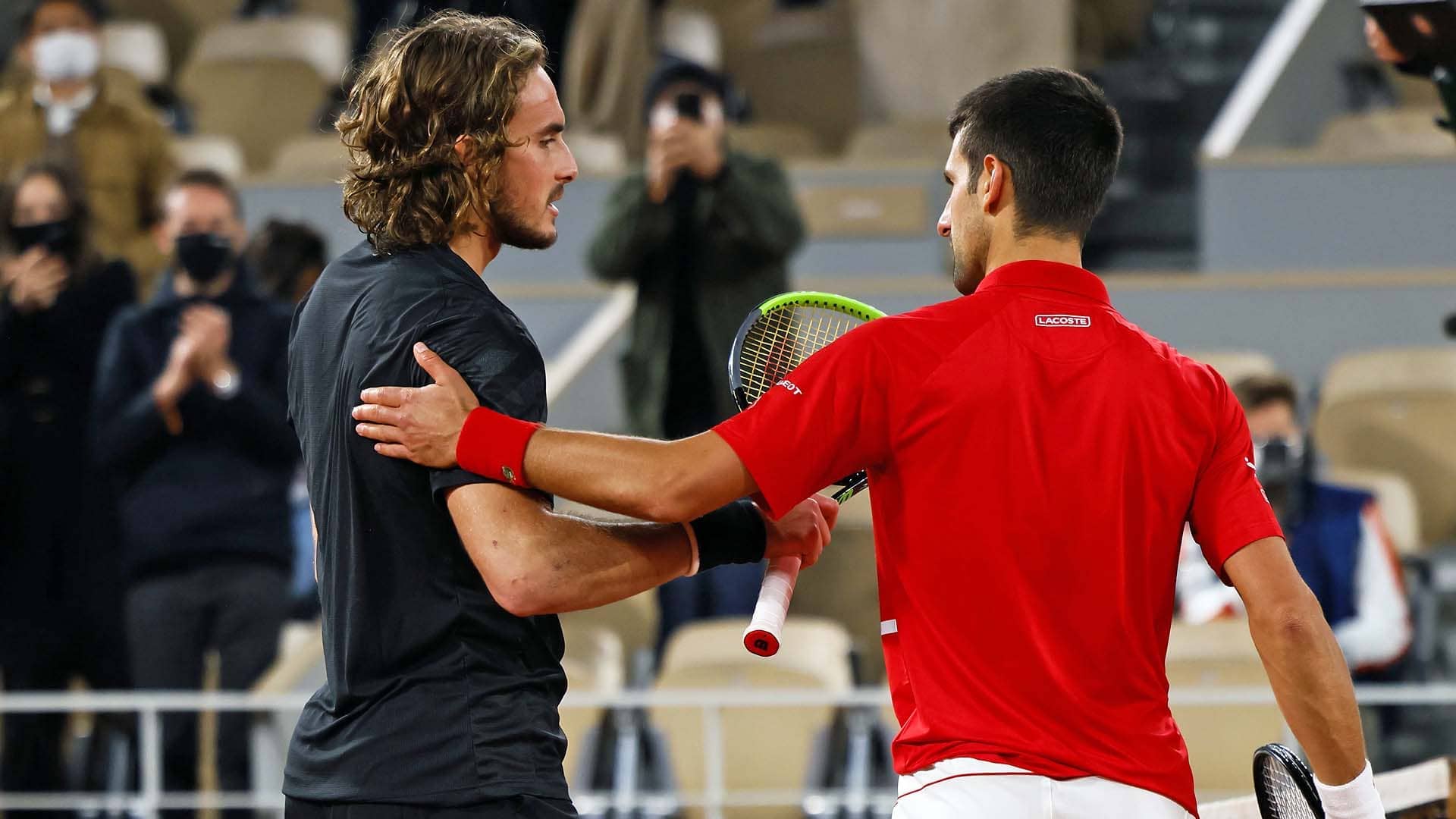 But can Tsitsipas stay focussed against the World No. 1, across five grueling sets, to claim the biggest win of his career – for the second match in a row? The Greek will be bidding for only his second in against a World No. 1 in 10 attempts. Thankfully for Tsitsipas, that one previous win came against Djokovic himself, at the ATP Masters 1000 event in Shanghai back in 2019.

Back then, Tsitsipas had just turned 21 and was in the midst of his breakthrough season, during which he won the Nitto ATP Finals and rose to a career-high World No. 5 ranking. Now approaching 23, Tsitsipas is sending the message that he’s firmly settled into his place in the sport’s upper echelons.

Tsitsipas has already guaranteed himself a new career-high of World No. 4 by breaking his three-match semi-final losing streak and advancing to the championship match. He could go as high as No. 3 with a win over Djokovic, overtaking Nadal in the FedEx ATP Rankings.

But age, rankings, records and statistics… Those are just numbers to Tsitsipas, who vowed to play every point with everything he’s got when he faces Djokovic on Chatrier.

“I’ve never believed, have never really thought at what age that achievement might come, but I’m really happy with myself,” Tsitsipas reflected. “I think I’ve shown good discipline so far. I’ve been progressive.

“I’m looking forward on leaving my entire body on the court.”

Exercising outside doesn’t raise your risk of melanoma, as long as you follow sun-smart strategies, new research suggests. Using sunscreen (a minimum...
Swimming

Ever wonder how to own a sports team? It’s a dream shared by children and adults like, but a small number of people...
View Post
Adulting

When Katrina Lake, founder of Stitch Fix, announced she was stepping down as CEO of her company last month, many were stunned. Investors, surely—shares...
View Post