The yellow bus is a ubiquitous symbol of the American school. Yet, historically, education researchers have focused on the interactions that take place in classrooms, family life, and neighborhoods, often leaving out the mode of transportation that gets children from their neighborhood and home to the classroom. According to master’s student Sawyer Hogenkamp, the school bus and the school bus driver are vital parts of the school community and should be treated as such — especially when it comes to bullying prevention. 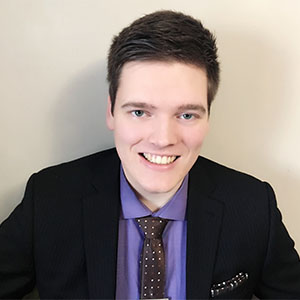 Having ridden the bus to school every day for 13 years, the school bus is a prominent part of Hogenkamp’s childhood. He remembers times when he or other kids were being teased where bus drivers struggled to figure out what was really happening behind them. In an effort to improve these situations for children and drivers, Hogenkamp has been conducting research in his home country of Canada for the past five years on the relationship between school buses, school bus drivers, bullying prevention efforts, and overall school climate. He’s been sharing some of his early findings at conferences around the world, including AERA and the World Ant-Bullying Forum and is currently in the process of expanding that research. Here, he answers a few questions about what it’s like to be on a school bus, expanding bullying prevention to the bus space, and why we need to see drivers as more than just the “hired help.”

You say that the school bus space itself is ripe for bullying. Why?
We know that school bus spaces can potentially make bullying interactions more frequent and more severe for students for a few reasons. The main one is that students are often not monitored with adult supervision. A lot of buses don’t even have a bus monitor which means supervision is left up to the driver. And, of course, the driver’s priority is not students’ wellbeing in terms of peer relationships — it’s in driving the school bus safely.

The other reason is that it’s a tight, enclosed space. Researchers have theorized it’s difficult for students to escape that environment because you’re held captive inside the vehicle. Measures such as assigning seats, spreading students apart can only go so far. It’s very difficult to remove a bullying perpetrator from a school bus, due to the challenging logistics of altering school bus routes and respecting all children’s rights to have transportation to and from school. So often, what I found in my research, is that [leaders] have to balance how students can still get access to school with experiences on the school bus.

Another thing that characterizes school bus environments is the grouping of students. Students are grouped by location. Sometimes you’re even going to have students from different schools on the same bus and you also have students from different age groups and cohorts who normally would not hang out together. There’s potential there for some unique interactions that only happen on the bus and wouldn’t happen in school or in the neighborhood.

Many schools have taken substantial steps to address bullying in classrooms in the last few years. Why doesn’t this always extend to buses?
In schools where there’s a lack of synergy between the goals of the school principals and the goals of bus drivers, we see conflicts where students misbehave on the bus and, even if the driver reports it, it gets swept under the rug. Or if a parent complains about a bus driver, an administrator would more likely side with the parent than with the driver.

I think one of the reasons for this is the stigma that school bus drivers often have where they aren’t really considered capable of assessing bullying and are only viewed as “hired help.” Principals also are very busy and tend to neglect transportation in favor of more pressing matters within the school building, during school hours. That said, there are cases where school principals and school policies seem to help drivers deal with bullying on the bus and seem to improve the school experience.

“School bus drivers who have training on bullying and meeting children’s needs, and who feel more integral to school operations, are much more comfortable seeking support with and reporting bullying to school personnel and families. Rates of bullying tend to drop in this situation.”

Did bus drivers indicate what they thought school principals and policies could do to help?
When I speak to school bus drivers, a lot of them are not satisfied with how school administration is dealing with students in terms of not intervening as much as they might if it was happening in a classroom. What they feel makes or breaks how they’re supported in addressing bullying is how included they feel in the bullying prevention and other school events. Many school bus drivers I talk to only hear about what the school is doing about bullying from the kids’ mouths, not from the school.

So inviting bus drivers to be a bigger part of the school is a good start?
Research is emerging that suggests that the school bus drivers who have training on bullying and meeting children’s needs, and who feel more integral to school operations are much more comfortable seeking support with and reporting bullying to school personnel and families. Rates of bullying tend to drop in this situation, even when there isn’t an adult bus monitor to assist drivers. A key recommendation would be to support bus drivers through training on bullying that corresponds with how their schools approach prevention. We have to remember that the school bus is really an extension of school property, and so bus drivers carry the same legal obligations when caring for children as teachers and recess monitors would. When bus drivers practice the same strategies as other school staff, that’s fantastic because when the students get on the bus, they can easily internalize that they’re still at school: students are held accountable for their behavior in the same ways, and students feel safer.

What else? Are there other ways teachers and principals can let kids know the bus is a part of school?
This sounds simple but having teachers or having the principal out there during loading and off-loading times makes a huge difference. Students can see that their teachers and principals know their bus drivers, and bus drivers can more easily flag down school staff to help intervene, or to have a brief conversation. Principals can build that time into their timetable and have a rotating schedule. Some of the most involved principals will even get on the bus themselves and ride along with the children for the whole route.

Previous articleFive things to know about the cargo ship blocking the Suez Canal
Next articleManny’s Will Give Away Free Sandwiches This Week, But The Mask Struggle Continues