HOUSTON — The Houston Texans made it clear last week that despite quarterback Deshaun Watson’s trade request, they have no interest in letting him go.

First-year head coach David Culley said he knew Watson was “the quarterback of the Houston Texans” when he took the job and “the outside stuff that was being said was irrelevant” when he was interviewing for the role.

If the Texans and Watson fail to relent on their positions, it appears this is headed for a standoff.

If the Texans don’t trade Watson before the draft, what could the rest of the offseason look like for Houston and its quarterback?

What happens if Watson doesn’t show up to mandatory minicamp this spring?

The league hasn’t announced whether its spring offseason program will be in-person or virtual, as it was in 2020. If Watson doesn’t show up — to either format — he would be fined $95,877 for missing Houston’s mandatory minicamp, according to ESPN’s Adam Schefter.

What if his holdout continues into training camp?

What’s different about this than in past years is under the new CBA fines cannot be forgiven. If Watson missed mandatory minicamp ($95,877), 28 days of training camp ($1.4 million) and three preseason games ($1.86 million), he could be looking at being fined more than $3.3 million, and that’s before we get to the regular season.

Why is June 1 an important date? 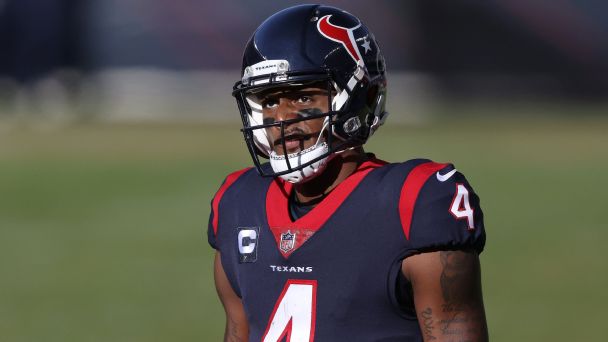 • What if Deshaun Watson decides to sit out?
• Why TB was a big draw for Bruce Arians
• Al Davis: Lawsuits, mergers, pranks, more
• Who’s the MVP? Rodgers vs. Mahomes
• Bears under pressure to finally fix QB issue

If the Texans decide to trade Watson before June 1, all $21.6 million of his remaining signing bonus ($5.4 million times four years) accelerates into Houston’s cap for 2021.

It’s still $21.6 million of dead money over two years, but by waiting until after June 1, they can split it up so it doesn’t hit all at once. This could be especially important since the salary cap could decrease in 2021 because of all the money the NFL lost due to the pandemic last season.

If the Texans crunch the numbers and decide they do want to take the dead money hit in 2021, the team may want more compensation for Watson in the trade. According to Over The Cap, the Texans have $205,984,775 in contracts on the books in 2021, although they have quite a few contracts they can get out of, or restructure, to add cap space. In 2022, that number drops to $184,724,776. Spotrac currently estimates a salary cap of $175 million as the expected floor for 2021.

What if Watson doesn’t report all season?

If Watson sits out the entire season, his contract would essentially freeze and he obviously would not be paid for the season. Watson signed a four-year, $156 million contract extension in September that keeps him under contract through the 2025 season. The Texans could also use three (very expensive) franchise tags on Watson after the 2025 season that would keep him in Houston through 2028.

In the unlikely event Watson chooses to retire over playing another snap for the Texans, Houston can collect $21.6 million, according to Schefter.

If Watson retires, the guaranteed money in Watson’s salary would count against the cap, but Houston could also choose to go after the money. For example, when quarterback Andrew Luck retired in 2019, he and the Indianapolis Colts reached a settlement, where the team chose not to recoup $24.8 million from its former quarterback.

Can he un-retire and play for another team?

Yes, Watson can come out of retirement, but his contract would freeze and the Texans would still hold his rights because contracts are counted in seasons accrued, not in years. For example, now-Buccaneers tight end Rob Gronkowski announced his retirement in March 2019 and sat out the season. When he decided he wanted to come back, the Patriots still owned his rights for the 2020 season and the Buccaneers had to trade for him.

If, for example, Watson retired for the 2021 and 2022 seasons and then wanted to come back in 2023, he would still be under contract with the Texans for the next five seasons.

What’s next in Houston?

Now that the Texans have hired Culley and Caserio, their priority is trying to convince Watson to reconsider his trade request and play for the team in 2021. Last week, Schefter reported that Watson hadn’t spoken to Caserio since he was hired.

“The best way that you handle relationships is to communicate and be honest and be forthright, and we’re going to do that with everybody that’s in this building,” Caserio said when asked how he and Culley planned to salvage the relationship with Watson.

Multiple sources say the Texans are serious about keeping Watson because he signed the contract extension in September and that keeps him in Houston through the 2025 season (which could technically be longer because they could use the franchise tag in 2026, ‘27 and ‘28).

Although this could get ugly and be a difficult situation for a team trying to change its culture, the Texans believe Watson’s value is the same if he sits out a year.

The worst-case scenario for Houston is probably failing to trade Watson before the draft and then ultimately making the trade during the season, when it will be harder to get a huge return and the draft slots won’t be locked in for any picks they receive.

YouTube announced this morning it will soon introduce a new experience designed for teens and tweens who are now too old for the...
Basketball

DALLAS -- The Dallas Mavericks had lost an 11-point lead and all the momentum, having gone almost three minutes without scoring, before Luka...
Technology

Designer develops kitchenware line for people living with one arm

Oneware is a series of kitchen accessories designed for people...

YouTube announced this morning it will soon introduce a new experience designed for teens and tweens who are now too old for the...
View Post
Basketball

DALLAS -- The Dallas Mavericks had lost an 11-point lead and all the momentum, having gone almost three minutes without scoring, before Luka...
View Post
Technology

Designer develops kitchenware line for people living with one arm

Oneware is a series of kitchen accessories designed for people...
View Post
Basketball

Amazon’s cloud-gaming service, Luna, is now available to try for free in the US on select Fire TV devices without an...
View Post