Apparently a lot can change in nearly 17 months, from the time Goff signed a four-year, $110 million guaranteed contract to him being dealt in a blockbuster trade.

Along with Goff, the Rams sent two first-round picks and a third-round pick to the Lions in exchange for Stafford.

It’s a rare quarterback-for-quarterback swap, along with the Rams’ additional compensation to acquire Stafford and unload Goff’s burdensome contract.

The trade will not become official until the start of the league year on March 17, and neither team can publicly comment about the move until then.

In the meantime, here are some answers to your most pressing questions about where the Rams go from here.

What does Stafford bring?

Stafford, who turns 33 Sunday, arrives in L.A. with a talented arm, instincts to navigate pressure and a lifetime of statistics. 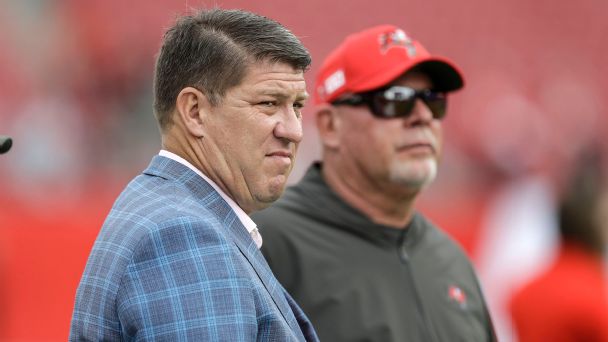 • Hot seat to Super Bowl: How GM built Bucs
• What’s next for Rams after Stafford trade?
• Can Browns continue progress with OBJ?
• Broncos’ lessons from Super Bowl 50
• Super Bowl timelines for every team

As an added bonus, his addition is expected to reinvigorate McVay as a play designer and playcaller.

The biggest question, however, is whether Stafford’s impressive numbers from 12 seasons in Detroit translate to playoff wins in L.A.

Stafford — the first overall pick in 2009 — ranks first in Lions history in completion percentage (62.6%), passing yards (45,109) and passing touchdowns (282) and his 74 wins are the most for a starting quarterback in Detroit.

And he did it without much support. Since 2009, the Lions have ranked among the worst rushing teams in the NFL and have fielded mostly subpar defensive units.

But the glaring fact remains: Stafford hasn’t won a playoff game in three postseason appearances. That must change for the Rams’ bold trade to pay off.

Why was Goff traded?

McVay, who gave his approval for the Goff extension prior to the 2019 season, decided an upgrade was needed to return to the Super Bowl.

A two-time Pro Bowl selection, Goff helped guide the Rams to consecutive division titles, an NFC championship and Super Bowl appearance in his first two seasons partnered with McVay, who was hired in 2017 to nurture the development of the second-year quarterback and bring an explosive offense to Los Angeles.

Ryan Clark explains why the Rams were not sold on Jared Goff after trading him to the Lions.

However, the offense has steadily declined since a discombobulating 13-3 loss to the New England Patriots in Super Bowl LIII.

With a sporadic running game the past two seasons, Goff has struggled when forced to play outside of his play-action comfort zone. And he has been inconsistent dealing with pressure, while proving prone to turnovers.

Since 2019, Goff ranks second in the NFL with 38 turnovers, one behind the New York Giants‘ Daniel Jones.

What’s the Rams’ salary-cap situation after the move?

It’s impossible to know the exact ramifications the trade will have on the salary cap until the NFL determines the 2021 cap number.

The Rams will incur a $22.2 million dead-money charge for trading Goff, but that will amount to a $12.75 million cap savings from what his cap charge ($34.95 million) would have been, according to ESPN Roster Management. Stafford will cost $20 million in salary-cap charges.

Last season, the salary cap was $198.2 million, but it is expected to drop in 2021 due to a lack of revenue caused by the coronavirus pandemic. Before the season, a salary-cap floor of $175 million was implemented, but the cap is not expected to drop that low.

Similar to last season, there will be a significant gap between the Rams’ top talent and other players who will be relied on to start or provide depth.

What is the Rams’ draft situation?

First-round picks, who needs them? Not the Rams.

Since making a historic trade up the draft board in 2016, jumping from the No. 15 pick to No. 1 to pick Goff, the Rams have not made another first-round pick.

In fact, the Rams are now scheduled to go seven years without making a first-round selection after sending their 2022 and 2023 first-picks to Detroit as part of the Goff-Stafford trade.

Unless a future trade is made to move into the first round, the Rams will become the third team since the 1970 merger to go seven years without a first-round pick, according to the Elias Sports Bureau.

Where did all the picks go?

The 2017 pick went to the Tennessee Titans as part of the package to move up for Goff. In 2018, Snead sent the No. 23 overall pick to the Patriots in exchange for wide receiver Brandin Cooks. The following year, the Rams had the No. 31 pick, but traded down and finally, their 2020 and 2021 first-round selections were sent to the Jacksonville Jaguars as part of the blockbuster move to acquire Ramsey in October 2019.

In the upcoming draft, the Rams own second-, third-, sixth- and seventh-round selections and are expected to gain additional third- and fourth-round compensatory picks due to the departures of outside linebacker Dante Fowler Jr. and linebacker Cory Littleton last year.

Are the Rams positioned to win a Super Bowl now?

That was the intent of the trade — to win now, with Donald and Ramsey in their prime and anchoring a defense that last season ranked No. 1 in the league, and with Kupp, Woods and tight end Tyler Higbee on offense to provide a solid supporting cast, along with up-and-coming feature running back Cam Akers.

However, the Rams must shore up some holes before they can sharpie Super Bowl LVI at SoFi Stadium on their calendar.

In 2020, behind first-year coordinator Brandon Staley, the defense allowed an NFL-best 18.5 points per game. That performance will be difficult to repeat.

Staley departed after one season to become head coach of the Los Angeles Chargers. NFL veteran coach and assistant Raheem Morris replaces Staley. However, McVay wants to keep Staley’s defense and Morris comes from a 4-3 background — not the 3-4 the Rams play — and must quickly learn the intricacies of Staley’s system.

Plus, there could be turnover at key positions. Outside linebacker Leonard Floyd, safety John Johnson III and cornerback Troy Hill are scheduled for free agency. Given the Rams’ anticipated salary-cap constraints, it will be a challenge for them to return.

On offense, the Rams’ most pressing need after acquiring Stafford is finding a deep threat to stretch a defense, which has been lacking since they traded Cooks to the Houston Texans last offseason.

Are the Utah Jazz a real threat to the Los Angeles Lakers and LA Clippers?

ONE MONTH INTO the NBA season, Steve Kerr had seen enough to make a rather grand declaration about the Utah Jazz.The Jazz had...
Softball

Jimmy Kolaitis Talks 2021 Sun Devils, A Look at The Polls and the Big 10 is Starting

Photo Courtesy of Arizona State In this edition of In The Circle, we start by looking at the latest polls in our newest segment,...
Running

Central Park has long played a significant role in New York City’s running culture. Runners who visit the city carve out time for...

Are the Utah Jazz a real threat to the Los Angeles Lakers and LA Clippers?

ONE MONTH INTO the NBA season, Steve Kerr had seen enough to make a rather grand declaration about the Utah Jazz.The Jazz had...
View Post
Softball

Jimmy Kolaitis Talks 2021 Sun Devils, A Look at The Polls and the Big 10 is Starting

Photo Courtesy of Arizona State In this edition of In The Circle, we start by looking at the latest polls in our newest segment,...
View Post
Running

Volleyball is one of the most popular sports worldwide. It attracts even more fans than https://playamo.one/au/ or Netflix. The reason is that volleyball...
View Post