Will a true island green on 18 create more drama?


RANCHO MIRAGE, Calif. – The ANA Inspiration celebrates its 50th anniversary this week, and the 18th green has gone retro. No grandstand. No Great Wall of Dinah. Just an island of drama.

Or will it be?

“I honestly find it a bit boring,” said Madelene Sagstrom, who believes not many will go for the green in two, even with a forward tee. Tournament officials typically move the tee up on two days during the ANA Inspiration.

Mel Reid will likely go for it with a 5-iron in hand because she’s that kind of aggressive player, but she too believes fewer players will take on the risk with greens as firm as they are and the grass mowed down in the back and nothing there to stop it. Not to mention the yellow hazard stakes.

For years there has been typically a grandstand behind the green for VIP hospitality. With no fans at last September’s ANA, organizers opted to instead put up a giant blue wall – closer than the grandstands usually sit – with ANA scripted in small letters across the top. As far as billboards go, it wasn’t exactly effective.

Not surprisingly, the wall came into play in a big way when Mirim Lee rocketed a 5-wood at it, banking on the wall to stop her ball from going in the water. It worked, and Lee proceeded to chip for eagle to make her way into a playoff against Brooke Henderson and Nelly Korda that Lee quickly won. Henderson’s second shot in regulation got stuck under the wall and her sister/caddie Brittany crawled inside the blue mesh to retrieve it. 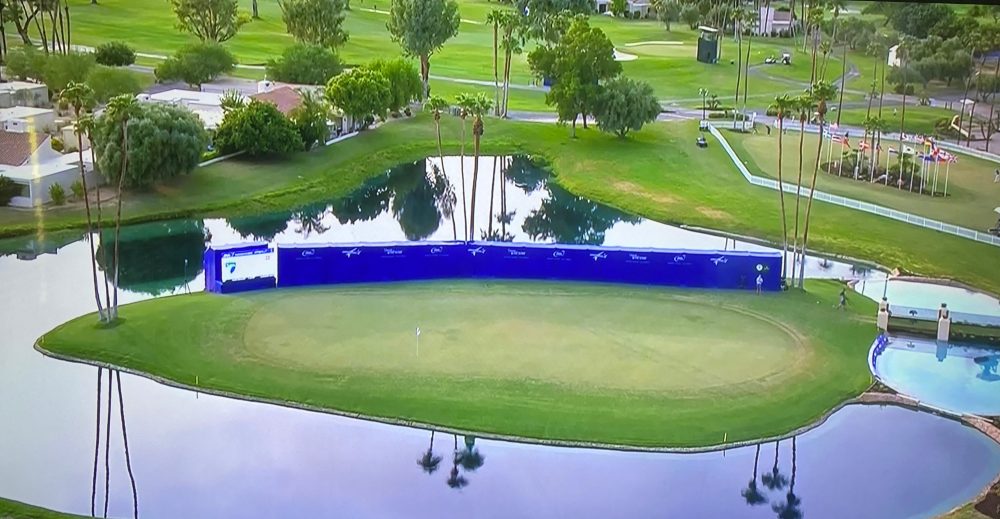 The blue wall behind the 18th green at the ANA Inspiration during a Golf Channel broadcast. (Beth Ann Nichols/Golfweek)

“The amount of time the boys hit it into grandstands and get away with shots and bounce onto greens,” said Reid, “and then they just made a big fuss because we didn’t have any crowds. I mean, it’s been like that for years. I don’t think they needed to change it, but I get why they have because it does look a little bit stupid with no crowd, but it’s tough.”

Stacy Lewis, a past champion of this event, appreciates that the hole now plays as it was originally designed. (It’s also played this way during the first stage of LPGA Q-School.) Lewis never goes for this green in two though, so nothing really changes for her.

“I hit 5-iron yesterday, landed in the middle of the green and went over in the water,” said Ryann O’Toole.

The same thing happened to Jennifer Kupcho with a 4-iron.

Nelly Korda hit a 6-iron just short and it rolled into the middle of the green. Her 5-iron went over the green. Korda said she was undecided on whether or not she likes the change.

Last year, Lexi Thompson had a 7-iron in from the forward tee to a back pin. That’s the shortest she has seen it play. This morning, Thompson hit a 4-iron that worked out quite nicely. If it’s more than a 6-iron though, Thompson said she likely won’t go for it in competition.

“It would have to be a perfect number honestly, with any club, to get the full max height to be able to stop it,” said Thompson. “But it’s good, it’s a major. It should be challenging and require more thought.” 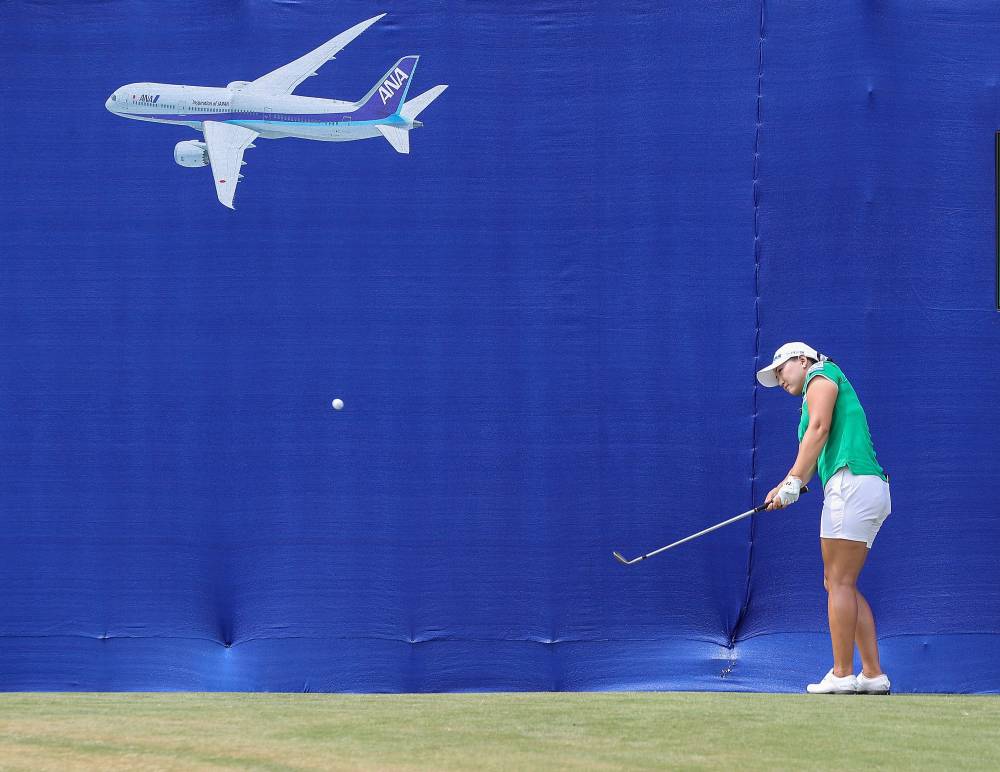 Mirim Lee hits her third shot onto the 18th green during the second round of the ANA Inspiration at Mission Hills Country Club in Rancho Mirage, California on Sept. 11, 2020. (Photo: Jay Calderon/The Desert Sun)

Brooke Henderson said it’s no longer an automatic green light with 3-wood in hand, but if she has hybrid or 7-wood in, she’ll definitely going for it.

If Maria Fassi finds the fairway, she’ll likely go for it. From the back tee on Monday, she hit 5-iron with a helping wind onto the green. On Tuesday, she hit 7-iron from the forward tee.

“It makes you think a little bit more,” said Fassi. “It demands a better golf shot as well. I think it’s fun.”

Yani Tseng, the 2010 ANA winner, believes the raw island green makes for a great finish: “This is real golf.”

To ensure more drama over the weekend, Katherine Kirk believes softening the green more is the answer.

“The greens got firm on us yesterday,” Witters said on Tuesday.

With temperatures expected to reach 99 degrees over the weekend, players expect the Dinah Shore Tournament Course to get more baked out as the week goes on.

World Golf Hall of Famer Judy Rankin, lead analyst for Golf Channel this week, likes to see the most iconic hole on the LPGA return to its original form. This is how the closing par 5 played when she won in 1976.

“You have find a way to reward a shot that’s well-struck,” said Rankin, of making sure that the green is receptive throughout the week. 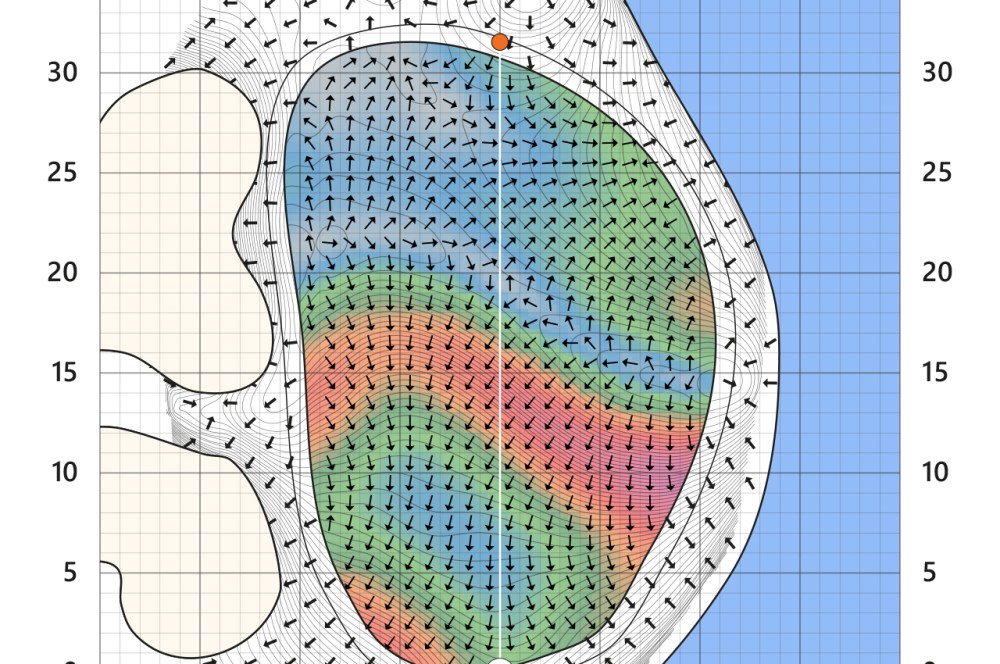